Ocean acidification affects our health in many ways 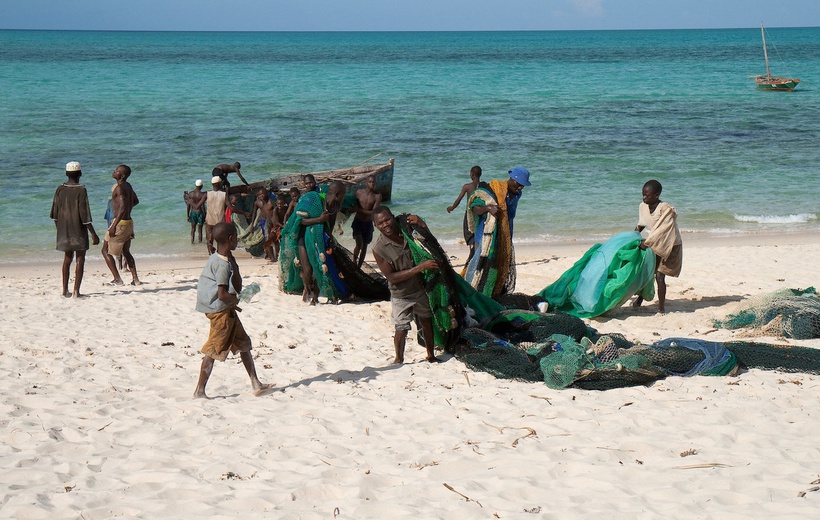 In some African countries the population obtains more than 50% of their animal protein intake from fish (photo: Stig Nygaard, www.flickr.com).

Of all the CO2 we release into the atmosphere, around 25% is taken up by the oceans where it interacts with seawater and forms carbonic acid. The oceans acidify. A doubling in acidity is expected by 2100.

When marine ecosystems are affected, so are we. After all, oceans provide many ecosystem services, such as nutrition, medications, and mental and physical health benefits. Ocean acidification is an emerging human health issue of ‘substantially greater complexity, and possibly scale, than currently appreciated’, scientists conclude from a review of studies carried out in recent years.

More than 4.5 billion people obtain at least 15% of their animal protein intake from fish. In some countries, the share of protein from fish can be greater than 50%. Ocean acidification not only affects the available seafood, but the nutritional qualities of this food as well: when the food source of fish species changes, the species that are harvested for consumption also change.

Direct negative effects are damage to the survival of eggs and early larval stages for some fish species, and the survival, growth, development, and reproduction across different groups of organisms. The culture of shellfish in coastal waters is already experiencing decline in some regions because of the reduced carbonate saturation and mortality of juveniles unable to grow shells. Many aquaculture species and systems are thought to be less susceptible to ocean acidification, however.

Indirect effects of ocean acidification can be driven by changes in food source, especially phytoplankton, which form the foundation of the marine food web. Also, degradation or loss of coral reefs or macro algal forests will induce ecosystem effects that alter the characteristics of dependent fisheries. Many fish and invertebrates rely on structures such as coral reefs for ecosystem services, including the provisioning of habitat and feeding grounds. The persistence of these dependent species will likely be threatened under ocean acidification as coral reefs bleach and transition to more simple habitats. Tropical fisheries will, therefore, likely be degraded by ocean acidification, with profound consequences for the people that depend upon them.

Ocean acidification affects the propagation of contaminants through the marine environment. These contaminants, such as heavy metals, pharmaceuticals, and active ingredients in personal care products, mainly enter the environment via municipal effluent discharges, aquaculture, animal husbandry, horticulture runoff and waste disposal. They can be taken up by organisms and then transferred through the food chain, accumulating in tissues of organisms at higher trophic levels, including humans. Ocean acidification may intensify this bioaccumulation.

Ocean acidification can modify the abundance and chemical composition of harmful algal blooms. These algae are food to shellfish, their natural toxins accumulate in shellfish, and this may in turn negatively affect human health. Ocean acidification has been found to lead to an increased algal growth rate, a change that could accelerate the production of toxic algae. Moreover, the toxicity of the blooms is likely to increase. These toxins not only enter the human body through food, but also trough the air. They can be releases and mixed into seawater aerosols when the algae are broken up in the surf.

The livelihoods of approximately 300 million people depend on marine fisheries. In the past, the collapse of regional fishing industries in Europe has caused unemployment, financial pressures, societal stress, and a decline in the mental health of individual fishers and the fishing community. The oceans also provide nature-based recreation and exercise opportunities that promote “nature-connectedness”, all of which have been shown to be a fundamental of mental health. The anticipated loss of (access to) habitats due to ocean acidification reduces recreation opportunities and the formation of associated social connections.

The vast biodiversity of the oceans offers opportunities for medicines and other natural products to counter the impacts of environmental stressors on human health. So far, the exploration of these opportunities has been limited. As ocean acidification is expected to negatively impact biodiversity, it will also impair our ability to prospect for new medications in such areas.

How to deal with health effects of ocean acidification

For the sake of our health it is important to conserve and restore biodiversity and ecosystems. This starts close to our homes, where outputs from industry and wastewater facilities, agricultural discharge, and urban runoff deteriorate the water quality of receiving marine ecosystems and thereby reinforce the effects of global changes, such as ocean acidification. Monitoring and managing water quality at a local scale reduces the effects of these global-scale changes. In addition, marine-protected areas, for instance, could encourage the resistance and resilience to the loss of species due to acidification.

It looks like we have to adapt to some disturbance of ecosystems and biodiversity due to ocean acidification. One way to adapt is to boost the human consumption of species that benefit from ocean acidification, such as fast-growing macro algae. This may compensate for the loss of parts of the seafood diet and help satisfy future demands. Still, changes in the availability of fish species may lead to malnutrition and increase inequalities in societies: those who are able to afford the price of an increasingly rare resource will still have access, many others will not.