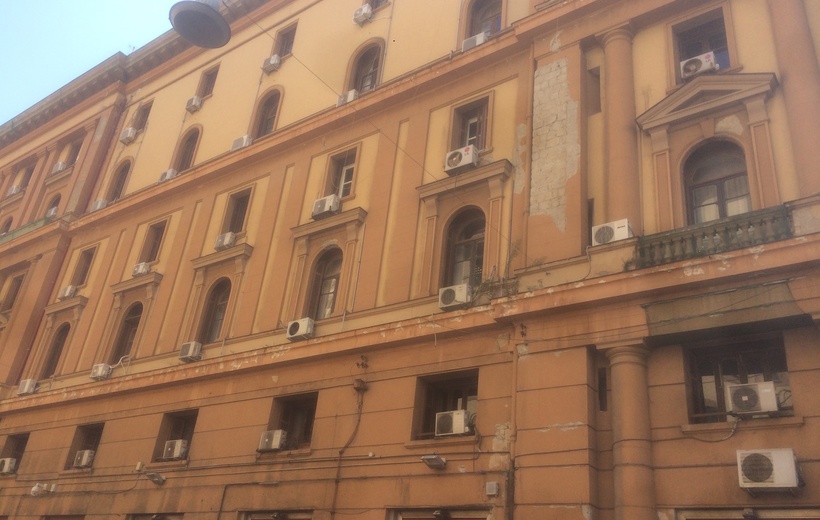 Photo: Air conditioning in Napels (Italy). The use of AC systems will increase. As a result, the waste heat of these more widely adopted systems enhance the urban heat island effect, which further increases cooling energy use.

Cities are warmer than their environment. In future decades, urban heat islands will create more heat stress for more people for three reasons: ever more people are living in urban areas and are thus exposed to the urban heat island effect, the effect itself will increase when cities expand, and this is an extra effect on top of global warming. By 2050, there will be an additional 2-3 billion people living in urban areas, where surface temperatures have already been rising faster than the global mean.

How much will heat stress increase for the urban population between now and 2050, due to urbanization and climate change?

A study was carried out on the projected global urban land expansion and heat island intensification through 2050. A distinction was made in arid, tropical, temperate, and cold climate zones. Trends of historical urban expansion were extrapolated into the future, based on scenarios of socioeconomic development used by the IPCC. Projections of future urban land areas were combined with data on population growth, to estimate both the change of the urban heat island effect and the number of people exposed to this. These data were integrated with projected global warming under a moderate scenario of climate change.

It is expected that globally urban land will expand by 78% - 171% between 2015 and 2050. More than two-thirds of this urban expansion will occur in Asia (46% - 49%) and Africa (16% - 25%), where the majority of urban population growth will be concentrated. More than 70% of the new urban lands will concentrate in the more humid temperate and tropical zones.

This urban land expansion will result in average summer daytime and nighttime warming in air temperature of 0.5 °C - 0.7 °C, and up to about 3 °C in some locations. During winter, the additional urban heat island warming will be weaker: on average 0.4 °C - 0.6 °C (up to about 2 °C). This additional urban heat island warming is on average about half, and sometimes up to two times, as strong as that caused by global warming under the moderate scenario of climate change.

The magnitude of expansion and the subsequent warming are the most prominent in temperate urban areas.

Regions most vulnerable to the increasing urban heat island effect are those with low economic capacities but substantial warming caused by urban land expansion. The majority of these risk-prone urban areas will be in the tropical zones. In total, about half of the world’s urban population will live in the most risk-prone regions by 2050.

Studies have shown that in the coming decades, global warming will increase the temperature-related mortality rates by 3%-13% in tropical zones but will reduce those by up to 1% in temperate and cold zones. The additional warming induced by urban expansion will exacerbate heat-related health risks, and probably increase mortality rates. In addition, there will be a negative impact of rising humidity.

The use of air conditioning, and thus energy consumption, will increase. As a result, the waste heat of the more widely adopted AC systems enhance the urban heat island effect, which further increases cooling energy use. Wintertime warming can result in energy savings by reducing heating requirements in the temperate and cold zones. The energy savings on heating are not likely to outweigh the extra costs on cooling, however.

The extra warming in 2050 due to urban expansion will be as significant as, and at places even stronger than, that caused by global warming. This effect will expose billions of urban dwellers to greater extreme heat risks. This enormous urban land expansion and the subsequent warming are likely to occur in a relatively short time window of three decades.

According to the authors of this study, interventions are needed to restrict or redistribute urban expansion or to mitigate urban heat, in order to reduce the wide ranges of impacts on human health, energy systems, urban ecosystems, and infrastructures.