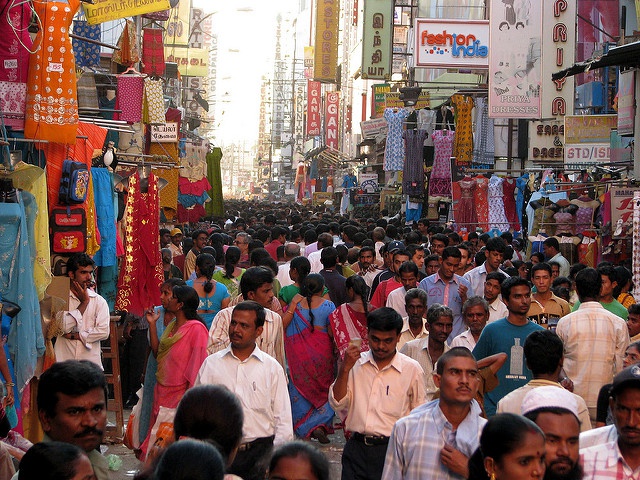 Exposure to heat-related extremes will especially increase in countries such as India, due to both more frequent heat wave days and high population growth (photo: McKay Savage, www.flickr.com).

Worldwide the number of heat waves will increase. This will affect people’s well being and will increase heat-related mortality rates. More people will be exposed to heat-related extremes, not only due to global warming but also due to population growth. What effect is more important in determining future increase of people’s exposure to heat waves: climate change or population growth?

As always in these studies, the definition of a heat wave is an important factor. In this study a heat wave day is defined as a day that meets two thresholds: daily mean temperature is greater than the 2% warmest days in the present-day climate (the period 1981 - 2005), and maximum daily temperature exceeds 35 °C.

The impact of climate change dominates over population growth

The results show that the impact of climate change is a stronger determinant of exposure than demographic change in these scenarios. Exposure is quantified as the number of heat wave days times the number of people exposed to this heat, so called person-days of heat wave exposure. The moderate scenario of climate change, when compared with the high-end scenario, leads to a global reduction in exposure of over 50%. The slower population growth scenario leads to roughly 30% less exposure. Naturally, exposure reduction varies from one region to another. However, in almost all world regions, the impact of the climate change scenario dominates over the impact of the scenario of population growth.

Sub-Saharan Africa and South-east Asia are most vulnerable

The patterns of the spatial distribution of change in exposure are similar across all scenarios. Increases are largest in the equatorial/mid-latitude regions corresponding to the largest increase in heat wave days and high population growth areas such as India and large portions of Sub-Saharan Africa. Exposure increases in Eastern China in all scenarios, despite widespread areas of projected population loss. Across North America and Europe, increased exposure is most evident in urban areas (relative to rural).

Of all world regions, Sub-Saharan Africa and South-east Asia would benefit most from mitigating climate change to the moderate scenario compared with the high-end scenario. The absolute reduction in heat wave exposure resulting from this mitigation is largest in Sub-Saharan Africa. In relative terms, however, South-east Asia stands to gain the most, experiencing roughly five times less exposure. The smallest reductions in exposure resulting from this mitigation occur in the cooler, slower-growth regions of Europe and North America, as well as Oceania.