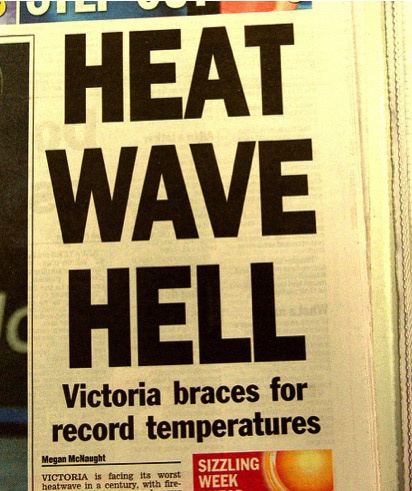 Heat and humidity, a dangerous combination

Currently, some regions most at risk for extreme hot and humid weather, Northeast India, East China, West Africa, and the Southeast US, are some of the world’s most densely populated. In India and West Africa population density is expected to rise dramatically over the 21st century. In these risky regions, the number of people exposed to extreme heat will not only increase due to population growth combined with climate change. Also the continued urbanization will make the situation even worse. Due to the urban heat island effect (cities are generally several degrees warmer than their surrounding non-urban areas) more people will be exposed to extreme heat.

Future changes in the occurrence of these extreme heat conditions have been studied for a moderate and high-end scenario of climate change and several projections of population growth, based on a large number of climate models (GCMs).

The results suggest that exposure to extreme hot and humid conditions will rapidly increase throughout the 21st century and potentially beyond. By 2080 the relative frequency of these present-day extreme events could rise by a factor of 100-250 in the tropics and parts of the mid-latitudes, areas that are projected to contain approximately half the world’s population. In addition, population exposure to extreme conditions that exceed recent deadly heat waves may increase by a factor of five to ten. By 2070-2080, the threshold limit of human tolerance to heat stress will likely be exceeded for many people under the high-end scenario of climate change. Under the moderate scenario of climate change this situation can be avoided.

A severe threat to human health

Some of the most affected regions, especially Northeast India and coastal West Africa, currently have scarce cooling infrastructure, relatively low adaptive capacity, and rapidly growing populations. In the coming decades heat stress may prove to be one of the most widely experienced and directly dangerous aspects of climate change, posing a severe threat to human health, energy infrastructure, and outdoor activities ranging from agricultural production to military training. Research has shown, however, that relatively simple adaptation strategies such as early warning of heat waves, public education campaigns on the dangers of heat, and social check-ups on vulnerable people can drastically reduce the death toll on hot days.