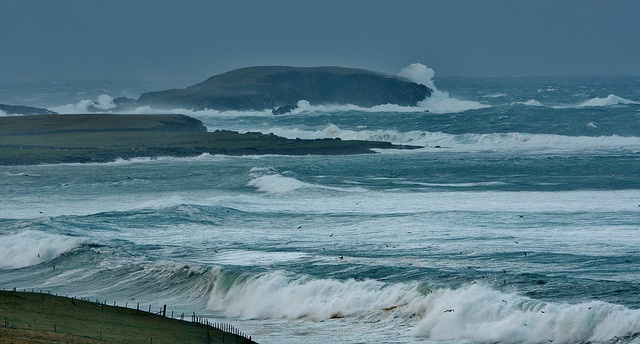 Our understanding of the impact of sea level rise on flood risk is growing. In fact, recent results are quite shocking. For the US coast Buchanan et al (2017) concluded that events that currently have a 1% chance of occurrence in any given year (so-called 100 year events) may occur 25 times as often by 2050 under a moderate scenario of climate change, and 40 times as often under a high-end scenario. They also pointed at different impacts of sea level rise on the occurrence of relative frequent (moderate) and rare (extreme) flood events: on the east coast, cities like Charleston or New York will experience a strong increase in the number of moderate events, while a city like Seattle on the west coast will experience a more rapid increase in the number of rare extreme events.

We summarized this study in our article ‘Current once-in-a-hundred-years flood levels along US coastline may occur every few years by 2050’. Similar results were shown in a study by Vitousek et al (2017), summarized in our article ‘Just a few cm of sea level rise may double the frequency of coastal flooding’.

Sea level rise, however, is a gradual process that can be anticipated. Extreme sea levels due to storm surges, high tides and waves, on the other hand, occur randomly and accurate forecasts become only available a few days or hours before the impacts occur. Recent events like Hurricanes Harvey and Irma have revealed how vulnerable and ill-prepared many coastal communities are for such extreme events. Therefore, adequate adaptation has to take into account sea level rise and extreme sea levels as well as the uncertainties inherent to both of them.

Little is known about future extreme sea levels at continental and global scales. In the IPCC assessments, for instance, a lot of information is presented on sea level rise but the information on extreme sea levels is limited. Uncertainties in these extremes are at least as important as uncertainties in projections of sea level rise. Hence, both these contributions to flood risk need to be integrated to fully assess impacts and adaptation needs.

Future changes in storm surges may add to sea level rise or damp the effects of sea level rise. According to a study by Vousdoukas et al (2016) projected storm surge changes strongly vary along Europe’s coastline: an increase in Northern Europe, no change or a slight decrease in the South (summarized in our article ‘Storm surge levels increase along Northern Europe’s coastline’).

Thus, recent studies point at strong impacts of both sea level rise and storm surge on flood frequency, that strongly vary along the US or Europe’s coastline, and the combined effect of which is highly complicated. Clearly, these combined impacts need to be accounted for in coastal management and adaptation plans.