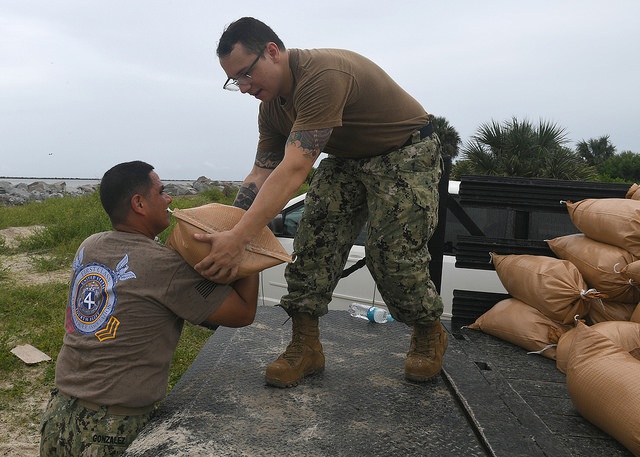 Sailors prepare sand bags ahead of Hurricane Irma. The rare occurrence of hurricanes, and not sea-level rise, will remain the dominant hazard on the U.S. east coast, the Gulf of Mexico, and the Caribbean Sea (photo: US Navy, www.flickr.com).

Coastal flooding is often the result of extremely high water level events due to the combined contributions of large waves, storm surge, high tides, and mean sea-level anomalies. Waves, storm surges, and tides in turn are influenced by the morphology of the coastal zone. The impact of sea-level rise on the risk of coastal flooding must be assessed as part of all these contributing factors. It is difficult, therefore, to predict the effect of sea-level rise on episodic flooding events due to the unpredictable nature of coastal storms, nonlinear interactions of physical processes (e.g., tidal currents and waves), and variations in coastal geomorphology.

Along many coastlines upper bounds exist on tide, storm surge, and maximum wave heights due to limiting processes (e.g., wave breaking and physical limits in wind speed, fetch, and duration prevent unbounded wave heights). At these coastlines the water level that occurs, say, once in 100 years is only slightly lower than the one that occurs once in 500 years. And the water level difference between events that occur once in 500 years and once in 1000 years is even less. In other words: the increase of water level with an increase of the return period of an event levels off when events become less likely due to the upper bounds of the factors that contribute to the extreme water level events. Along these coastlines just a little bit of sea-level rise already leads to a relatively large shift of the return period of a certain flood level, and these flood levels will occur far more often even if sea-level rises only a few centimetres.

The US as an example: different coastlines, different impacts sea-level rise

The effect of projected future sea-level rise on changes in the frequency of extreme flood levels was studied on a global scale. In this study the current conditions on waves, tide and storm-surge were included; they were not changed for future time slices.

A dire future for the top 20 cities

Just like the US West coast and the European Atlantic coast, the Tropics are also not influenced by hurricanes, e.g. Coastal flooding potential in these regions, therefore, also strongly increases with sea-level rise. Only 5-10 cm of sea-level rise may more than double the frequency of extreme water-level events in the Tropics as early as 2030. A current once-every-50-years flood event will occur every 5 years at 10 cm sea-level rise. This is an especially critical finding as numerous low-lying island nations in the Tropics are particularly vulnerable to flooding from storms today, and a significant increase in flooding frequency with climate change will further challenge the very existence and sustainability of these coastal communities across the globe.

The impact of sea-level rise on flooding potential increase is much less for coastlines that are influenced by tropical storm tracks, such as the mid-latitudes of the north-western Pacific below Japan, the mid-latitudes of the north-western Atlantic (the U.S. east coast, Gulf of Mexico, and Caribbean Sea), and the southwest tropical Pacific encompassing Fiji and New Caledonia. The rare occurrence of extreme events (hurricanes, e.g.), and not sea-level rise, will remain the dominant hazard on these coastlines. The number of current lower, high frequency flood levels, however, will strongly increase. In these coastal areas the impact of nuisance flooding, therefore, will strongly increase and will continue to be a major (increasing) problem.