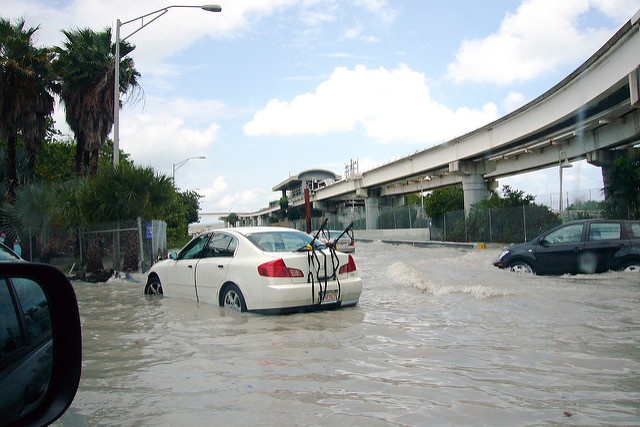 Sea level rise will strongly increase the frequency of current high frequency flood levels along the US east coast, according to a recent study. Along the west coast especially current low frequency flood levels will occur far more often. The authors of this study stress the importance of policy makers implementing policy based on the right information on the increase of flood levels. According to them, results presented by the IPCC in their latest assessment report ‘may be seriously misleading’.

Flood risk management, including investments in infrastructure, insurance schemes, evacuation procedures, and flood risk communication, is often tied to estimates of flood return periods. The flood level of a 100-year flood at a certain location along the coastline, for instance, is often used as a measure to define where to build houses and how to protect infrastructure, and for strengthening flood defences. Also, insurance companies often fix their insurance premiums on flood probability zoning, and even use this information to decide whether insurance against flooding is offered at all. Projections of future changes (increases) in the frequencies of flood levels that currently occur once-in-a-hundred-years, for instance, are therefore extremely important for a large number of reasons. In the absence of sufficient investments in flood protection, where flood defences are strengthened (raised) timely in line with rising flood levels, flood risk may increase dramatically already in a few decades. This was illustrated for the US coastline by results of a recent study on the amplification of flood frequencies with local sea level rise and emerging flood regimes.

Future flood return periods for the US coastline

The amplification of flood frequencies by sea level rise is expected to become one of the most economically damaging impacts of climate change for many coastal locations. Understanding the magnitude and pattern by which the frequency of current flood levels increase is important for developing more resilient coastal settlements.

This amplification was quantified for the US coastline for projections of relative sea level rise in 2050 and 2100. Relative sea level rise means that sea level rise was projected relative to the land, and that changes in the altitude of the land surface (often subsidence in low-lying coastal zones) was also included. Further, effects of land-ice melt and expert assessment of dynamic ice-sheet collapse were included. Tides and storm climatology were kept constant with respect to the current situation. The future projections are based on an intermediate and a high-end scenario of climate change.

Differences along the US coastline

The authors stress that the amplification of flood frequency varies across flood levels: as shown above, the frequency increase of a flood level that currently occurs once every 10 years is completely different from the frequency increase of a once-in-500-years flood level. This distinction has not been made in the latest IPCC assessment. According to the authors, this may lead to under- or overestimations of flood level increase, and create the risk that policy makers will implement policy based on wrong information. According to the authors the results presented by the IPCC ‘may be seriously misleading’.