50 times more weather-related deaths in 2100, unless we take action 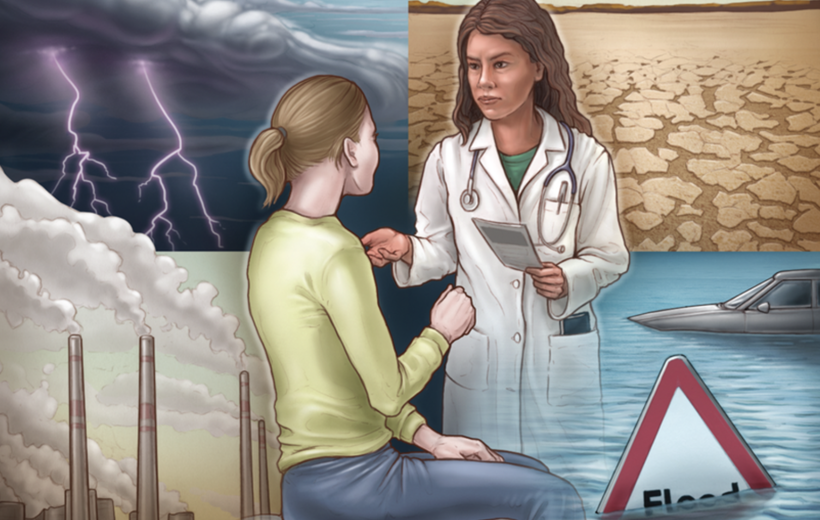 The seven most harmful weather-related extreme events in Europe due to climate change are heat waves, cold waves, droughts, wild fires, river and coastal floods, and windstorms. The occurrence and intensity of these disasters as well as demographic changes in Europe until the year 2100 have been estimated. This was done for scenarios for the 28 European Union (EU) countries as well as Switzerland, Norway, and Iceland (EU+).

Annual numbers of deaths were assessed in 30-year intervals relative to the reference period (1981–2010) up to the year 2100. Disaster records were combined with projections of climate change and socioeconomic (demographic, urbanization) development. Climate change projection was based on a business-as-usual scenario. Human vulnerability to weather extremes was estimated on the basis of more than 2300 records collected from disaster databases during the reference period; it was assumed that human vulnerability stays the same between now and 2100, and that no additional measures will be taken to enhance human capacity to cope with future extreme climate conditions

According to the results of this study two-thirds of the European population may be exposed to weather-related disasters due to climate change annually by the year 2100, compared with 5% during the reference period (1981 - 2010). Disaster-attributable deaths are expected to increase by roughly 50 times between now and 2071 - 2100 (by about 10 times in 2011 – 2040, and by about 30 times in 2041 – 2070). For the increased weather-related death toll, population change accounts for 10%, whereas climate change accounts for the remaining 90%. During the reference period (1981 - 2010), around 3000 Europeans lose their lives each year because of weather disasters.

Heat waves the most lethal, but drought fatalities are rare

Among these disasters, heat waves are the most lethal, accounting for 99% of the total future disaster-related mortality. During the reference period, about 2700 heat-related fatalities per year were reported in Europe by the disaster databases. Mortalities due to heat waves are expected to increase by 5400% in 2100. Urbanisation and urban heat island effects will augment the effects of heat waves.

Mortalities due to coastal floods are expected to increase by 3780%, due to wild fires by 138%, due to river floods by 54%, and due to windstorms by 20%, whereas mortality due to cold waves is projected to decrease by 98%. The effects of coastal flooding will be amplified by population growth in coastal flood-prone areas.

Droughts can be lethal in low-income and middle-income countries, mostly because of poor agricultural techniques and under-nutrition. On the contrary, people in high-income countries have diverse diets and guaranteed access to clean water for basic needs. Therefore, fatalities from droughts are rare in Europe and have not been reported in the observational period of this study.

Future effects show a prominent latitudinal gradient, increasing towards Southern Europe, where the premature mortality rate due to weather extremes could become the greatest environmental risk factor:  for Southern Europe during the period 2071 - 2100 about 700 annual fatalities per million inhabitants due to heat waves have been projected versus 11 during the reference period. In addition, Southern Europe will experience an upsurge in drought conditions. By 2071 - 2100, about a third of the population in Northern Europe and almost all of those in Southern Europe could be exposed to a weather-related hazard annually.

Direct injuries from flooding, windstorms, and wild fires could rise in the areas hit by the hazard. Because of more frequent and intense droughts in the future than at present, the number of people faced with reduced water resources for food production, domestic use, and other basic needs for human wellbeing could grow by more than 27 times between now (reference 1981 - 2010) and 2071 - 2100 (138 million people per year in 2100 versus 5 million now). The increasing number of heat waves might amplify cardiovascular, cerebrovascular, and respiratory diseases. Furthermore, mental health disorders associated with weather-related disasters, such as post-traumatic stress disorder and depression, could also increase.

Certain social classes could be more distressed by weather-related hazards than others. In particular, the most vulnerable will be elderly people and those with diseases, as well as the poor. Consequently, population ageing in Europe, which emerges as a major demographic trend for the coming decades, could further increase the effect on human beings of weather-related hazards. Conversely, expected advances in technology and economic growth will have an opposite tendency to reduce vulnerability through improved adaptation measures. The net effect of these socioeconomic processes remains uncertain.

The need to act now

The results in this study are based on the assumption that current human vulnerability (in the reference period) remains constant throughout this century. One may expect people to adapt, however, and become less vulnerable than previously to extreme weather conditions because of advances in medical technology, air conditioning, and thermal insulation in houses. Therefore, the results could be overestimated. Notwithstanding the fact that the estimates in their study are subject to uncertainty, the authors stress that their results do highlight important trends. Global warming, demographic changes, and urban expansion could result in rapidly rising effects of weather-related hazards on human beings in Europe if no stringent climate mitigation and disaster risk reduction activities are implemented.