Amsterdam is hot, in many ways 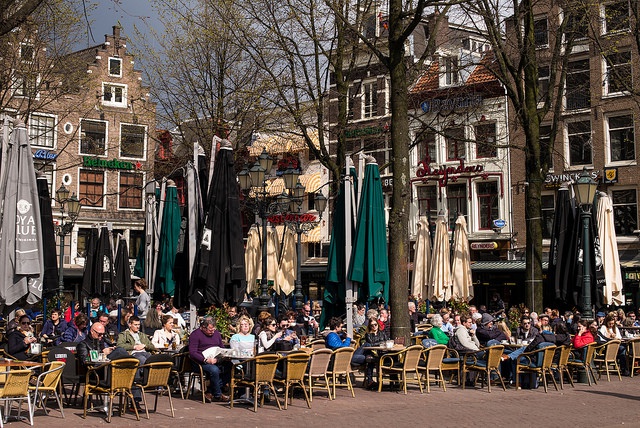 Cities are generally warmer than their surrounding rural areas. The urban fabric and surface materials capture and store incoming solar radiation during daytime and release the heat more slowly during the night than rural areas. High buildings can decrease wind speed and thus slower cooling of building and street surfaces. Evapotranspiration in cities is less due to lack of vegetation and surface moisture, leaving more thermal energy available to heat the city. Heat production by citizens, office buildings, industry, and traffic further increase air temperatures. Water bodies may limit warming in the early summer (when the water is still relatively cold), but may suppress cooling later in summer. The impact of all these factors on urban temperature is called the urban heat island effect.

The urban heat island effect will change because climate changes and as a result of urban development. The combined effect of these factors has been assessed for Amsterdam for 2040. Currently, maximum daytime temperatures are over 3 °C warmer in the city than in the surrounding countryside on moderately warm summer days. On warm days the difference can be up to 5 °C. Similar results were found in previous studies for other Dutch cities, and cities in other countries.

Projections of climate change and urban development in 2040 indicate that the urban heat island effect in Amsterdam may strongly increase due to a combination of urban development and more frequent extreme climatic events such as heat waves. The impact of average climate change will be small: an increase in average maximum temperature in summer of 1-3 °C, as projected in Dutch climate scenarios for 2050, will only lead to a marginal increase in urban temperatures of about 0.1-0.3 °C for inner urban locations. It is the combined effect of more frequent extreme hot days and lateral increase of urbanization that counts. Spatial planning strategies that reduce the lateral spread of urban development will thus greatly help to limit a further increase in the intensity of the urban heat island effect. The impact of compact urbanization on the urban heat island effect is much smaller than the impact of adding new residential areas to the city.