More tick-borne diseases, but not necessarily due to climate change - Longread 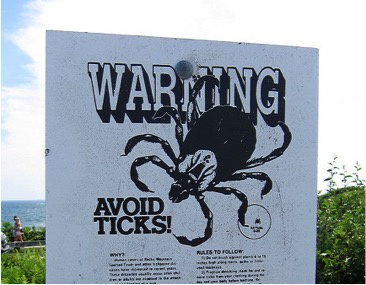 Disease-transmitting ticks are expanding over Europe, especially northward and to higher altitudes, consistent with observed warming trends. There is no scientific evidence so far, however, of any associated changes in the distribution of human cases of tick-borne diseases.

Lyme disease (Lyme borreliosis) is the most important vector-borne disease in temperate zones of the northern hemisphere. Tens of thousands of cases are reported in Europe every year. Central Europe is the region with the highest incidence of Lyme disease. Countries with annual incidences of over 20 per 100,000 citizens include Lithuania, Estonia, Slovenia, Bulgaria, and the Czech Republic. The number of cases in Europe has increased steadily: more than 360,000 cases have been reported over the last two decades. Over the last years there were approximately 65,500 patients annually in Europe. Its geographical distribution is still increasing, especially towards higher altitudes and latitudes.

Lyme disease is caused by the Borrelia bacteria and is transmitted by the tick Ixodes ricinus. This tick occurs throughout Europe, west to east from Ireland to the Urals, and north to south from northern Sweden to North Africa. In Europe, the overall mean prevalence of the Borrelia bacteria in ticks that causes Lyme disease is 13.7%. Central Europe (Austria, Czech Republic, Germany, Switzerland, Slovenia and Slovakia) has by far the highest rates (>20% in adult ticks), according to a publication in 2011.

The tick is sensitive to climatic conditions, requiring a relative humidity of at least 80% to survive during its off-host periods, and is therefore restricted to areas of moderate to high rainfall with vegetation that retains a high humidity (i.e. litter layer and soil remain humid during the day). Suitable habitats typically include deciduous and coniferous woodland, heathland, moorland, rough pasture, forests and urban parks.

Upsurge other tick-borne diseases as well

In 1993 the incidence of tick-borne encephalitis (TBE) showed a sharp rise in Central Europe and has remained high since. The main risk areas for TBE are in Central and Eastern Europe and the Baltic and Nordic countries. The areas extend to the west of Europe as far as Switzerland and the French region of Alsace, and to the south of Europe as far as northern Italy and the Balkan countries. In 2013, TBE was reported to be endemic in 27 European countries. Approximately 5000 - 12,000 cases of TBE are reported in Europe each year. It is estimated that TBE is one of the most serious neurological diseases transmitted by tick bites in Central Europe, Eastern Europe and Russia, and that it has a significant impact on public health in these geographical regions.

The incidence of TBE appears to be increasing. This could be due to several reasons: improvements in the diagnosis and reporting of TBE cases, increased recreational activities in areas inhabited by infected ticks, and changes in climatic conditions affecting tick habitats. Some regions, such as Scandinavia, have seen an increasing trend in TBE cases. In Sweden, mild winters with increased daily minimum temperature are correlated with higher numbers of ticks. Between the early 1980s and mid-1990s in Sweden a northward expansion of the geographic distribution limit of the disease-transmitting tick Ixodes ricinus and an increased tick density have been reported. Researchers related this expansion to climatic changes.

No evidence yet of link with climate change

The increase in the number of tick-borne diseases is not necessarily due to climate change. The upsurge of the incidence of tick-borne encephalitis (TBE) in the 1980-90s in Central and Eastern Europe, for instance, has been attributed to socio-economic factors (human behavior) rather than temperature. The increasing popularity of outdoor recreation is believed to be one of the most important causes of the increase of the number of cases of Lyme disease. In addition, biotic factors, such as increases in deer abundance and changing habitat structure, may play a role in some countries.

In the Alps and Scandinavia increased winter mean temperatures at higher altitudes and latitudes and an extended vegetation period may have permitted roe deer to spread to and inhabit previously inhospitable areas. Such deer movements may have allowed this tick to be transported northwards on the Scandinavian Peninsula, resulting in a significantly increased tick range during the last 30 years. Changes in forest and wildlife management probably also played a role. In Sweden, the northward spread of this tick to many previously tick-free localities was particularly rapid and extensive. This was probably due to a combination of the expansion of the roe deer population and the warmer climate (mild winters and extended spring and autumn seasons).

In the Netherlands there is evidence of an increase in tick bites amongst humans. Possible contributory factors suggested are an expansion of nature reserves, an increased abundance of wildlife, a reduction of pesticide use in agriculture and forestry, and climate change.

According to the IPCC, changes in the latitudinal and altitudinal distribution of ticks in Europe and North America are consistent with observed warming trends, but there is no evidence so far of any associated changes in the distribution of human cases of tick-borne diseases. Instead, climate-related changes in land use and socio-economic influences on human behaviour are more likely to have a strong impact on the distribution and abundance of ticks and infection risk of diseases such as Lyme disease and tick-borne encephalitis.

In the future, the distribution of the tick Ixodes ricinus is projected to expand in Northern Europe as winter seasons become shorter and milder, and deciduous woodland expands. In southernmost regions of Europe ticks will probably get active year-round (as opposed to seasonal) by the end of this century. Tick density and infection risk will probably also increase due to an increase in the density of wild and domestic vertebrates, paralleled with the expansion of suitable habitats for the host animals of ticks.

How to adapt? Early-warning, preventing tick bites, and vaccination

An early warning system for tick activity has been developed in the Czech Republic for tick-borne encephalitis. Since 1971, all reported TBE cases are laboratory confirmed. The incidence of TBE demonstrated a significant increasing trend in the country since the early 1990s. This led the Centre for Epidemiology and Microbiology (CEM) at The National Institute of Public Health (SZU) in Prague in collaboration with the Czech Hydrometeorological Institute (CHMI) to develop an early-warning system for tick activity and disease risk. It consists of forecasts that predict daily tick activity several days to a week in advance, published twice a week at the websites of CEM and CHMI. This system has been implemented in 2007.

Other ways to protect against tick-borne diseases are preventing tick bites, by avoiding tick risk areas, being informed about how to remove ticks and recognize early symptoms, using insect repellent on skin and clothing when in risk areas, and wearing protective clothing with long sleeves, and long trousers tucked into socks or boots.

The best way to protect against TBE is vaccination. Austria is among the most strongly affected countries in Central Europe, but the annual number of cases has strongly declined due to vaccination. In Austria, the high vaccination coverage (more than 80% of the total population has received at least one TBE vaccination) has led to a substantial decline in the number of annual cases. The incidence in the unvaccinated population, however, remained constant at about 6 per 100,000, suggesting no major changes in the countrywide overall risk of human exposure to TBE virus-infected ticks.

There is currently no vaccine available on the European market for Lyme disease. Since ticks do not have a high probability of transmitting the Borrelia bacteria that causes Lyme disease until 12–24 hours after ticks begin to feed on the blood of their host, immediate removal of ticks is one of the most effective ways of avoiding Borrelia infection.