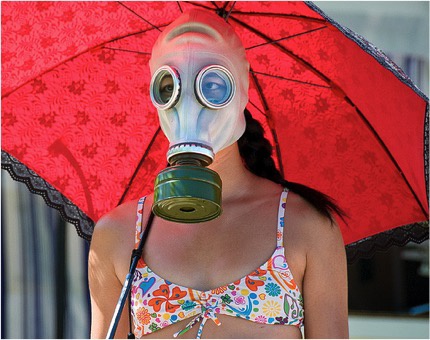 This article is based on a large number of scientific sources assembled by the ClimateChangePost. Check out the health items on the country pages on www.climatechangepost.com for more details.

50% of the deaths as a result of the European summer heat wave of 2003 may be associated with ozone exposure rather than the heat itself, research has shown. High levels of ozone and fine particulate matter increase the number of premature deaths. The extra impact of climate change on this effect may be relatively small. There are risk zones in Europe, however: the Eastern Mediterranean and industrialized regions in Europe.

Hot weather and air pollution go hand in hand. Especially fine particulate matter and ozone are of great concern to health. Exposure to fine particulate matter is associated with an increased relative risk of lung cancer, cardiopulmonary and all-cause mortalities while ozone exposure is associated with increased incidence of cardiovascular, respiratory and all-cause mortality. In Europe, over 600,000 premature deaths each year from cardiopulmonary and lung cancer diseases are attributed to the exposure to anthropogenic fine particulate matter. Ozone causes 20,000 premature deaths per year in the EU.

Climate change affects surface concentrations of air pollutants, such as fine particulate matter and ozone. According to a model study of daily mortality due to heat and exposure to ozone during the European summer heat wave of 2003, possibly 50% of the deaths could have been associated with ozone exposure rather than the heat itself. Calculations for the Netherlands have demonstrated that the increased air pollution (ozone, particulate matter) during heat waves is responsible for about 25 - 40% of the registered ‘heat wave mortalities’.

All in all, the impact of climate change on air quality, both fine particulate matter and ozone, is probably small. Parts of Europe may be significantly affected, however.

One of the areas most negatively affected by climate change is the Po-valley in Northern Italy, which is both heavily urbanized (e.g., Milan, Turin, Bologna) and also one of the largest industrialized regions in Europe. Because of its specific morphology, this area is also one of the most polluted regions in Europe, and climate change may aggravate this situation. Regarding ozone, concentrations will probably increase in polluted areas, especially during pollution events. Hence, peak concentrations are predicted to increase.

Air quality is expected to become poorer in the Eastern Mediterranean and the Middle East. Whereas human-induced emissions in most of Europe are decreasing, they are increasing in Turkey and the Middle East, which affect ozone and particulate air pollution, leading to excess mortality. In the northern parts of the Eastern Mediterranean and the Middle East increasing dryness will likely be associated with fire activity and consequent pollution emissions. Furthermore, this region has many large cities, including several megacities in which air quality is seriously degraded.

For Central Europe, under a scenario of intermediate climate change, model calculations show an increase in summer mean ozone for the end-century (2091 - 2100), and a decrease in annual mean fine particulate matter. The increase in ozone is related to a decrease in summer precipitation, whereas the decrease for fine particulate matter is related to an increase in winter precipitation. Little impact of climate change on air quality was shown for the mid-century (2041 - 2050).

In all European countries, large fires air may temporally but strongly pollute the air and lead to large numbers of excess deaths. The extremely large and long-lasting fires in western Russia in the summer of 2010 contributed for a large part to the thousands, and maybe even tens of thousands, of deaths related to that hot summer through the smoke-polluted air.

Pollen-related allergic diseases may well account for 10 - 20% of allergic diseases in Europe. Allergenic diseases caused by pollen may appear earlier in the year and may also increase. Climate change has caused an earlier onset of the spring pollen season in the northern hemisphere: by around 15 days over the last three decades.

Other effects are an increase of the numbers of house dust mite and a wider spreading of mould growth.