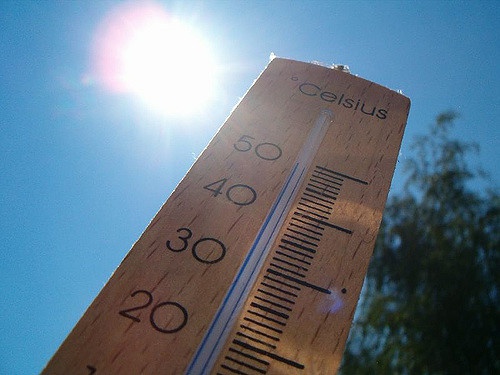 The increase in intensity of heat waves in combination with high tropospheric ozone concentrations represents the greatest direct risk that climate change poses to people’s health in Europe. According to research, 3°C global warming at the end of this century may lead to 86,000 extra deaths per year for all countries of the European Union combined.

A ‘slight forward displacement of death’

Heat waves combined with urban heat islands can result in large death tolls with the elderly, the unwell, the socially isolated, and outdoor workers being especially vulnerable. Heat waves thus pose a future challenge for major cities. For all countries of the European Union combined, 3°C global warming in 2071 - 2100 relative to 1961 - 1990 may lead to 86,000 extra deaths per year. Increasing numbers of older adults in the population will increase the proportion of the population at risk.

Research has revealed that part of the excess mortality during heat waves must be viewed as ‘only a slight forward displacement of death’. As a result of this forward displacement, a temporary fall in mortality is often observed in the weeks following a heat wave. The other part could be viewed as excess mortality with substantial loss in life years. Calculations for the Netherlands have demonstrated that the increased air pollution (ozone, particulate matter) during heat waves is responsible for about 25–40% of the registered ‘heat wave mortalities’.

In August 2003, a large part of Europe was hit by a severe heat wave, with catastrophic health consequences. Especially in France the death toll was extremely high. Unusually high temperatures led to an excess of almost 15,000 deaths in France, between August 4 and 18. The greatest increase in mortality was due to causes directly attributable to heat: dehydration, hyperthermia, heat stroke. In addition to age and gender, combinatorial factors included pre-existing disease, medication, urban residence, isolation, poverty, and, probably, air pollution (ozone). For the whole of summer 2003, the number of heat related deaths in Western Europe is believed to amount to over 44,000.

The summer heat wave experienced in 2003 is likely to become a normal event by the 2040s and considered cool by the 2060s.

The French experience confirms research establishing that heat waves are a major mortal risk, number one among so-called natural hazards in postindustrial societies. All parts of Europe are at risk. The 2003 health crisis was unforeseen, was only detected belatedly and brought to the fore several deficiencies in the French public health system: a limited number of experts working in the sphere; poor exchange of information between several public organizations that were under strength because of the summer holidays and whose responsibilities were not clearly defined in this particular area; health authorities overwhelmed by the influx of patients; crematoria/cemeteries unable to deal with the influx of bodies; nursing homes underequipped with air-conditioning and in manpower crisis; and a large number of elderly people living alone without a support system and without proper guidelines to protect themselves from the heat.

The heat wave called for the sudden mobilisation of several processes and mechanisms, i.e. monitoring, communication with the public, general organisation and response capability of hospitals and nursing homes, care to elderly people at home, etc. The difficulty was for the many services unexpectedly and suddenly to change the status of their readiness and level of activity, from normal to emergency mode. However, this emergency mode is foreign to most organisations, outside the ‘‘911’’ services. Many systemic flaws soon became apparent. In August, most people in charge, especially directors, were on a holiday, which impeded a swift modification in the status of mobilization.

Between 10 and 28 July 2006, Europe experienced another major heat wave. In France, it ranked second only to the one in 2003 as the most severe heat wave since 1950. The 2006 heat wave was longer in duration than that of 2003, but was less intense and covered less geographical area. Based on a historical model, the temperatures were expected to cause around 6,452 excess deaths in France alone, yet only around 2,065 excess deaths were recorded.

In 2010, western Russia experienced an intense heat wave from early July through to the first half of August, having already been subject to significantly above average temperature in the previous 2 months. In Moscow, temperatures were 7.6°C above average for July, making it the hottest July on record by 2°C. On 29th July, Moscow recorded its hottest ever temperature of 38.2°C, the highest since the records began 130 years ago. There were also 33 consecutive days above 30°C in the city. Such a prolonged hot weather situation over western Russia on virtually every day from the beginning of July until the middle of August is highly unusual.

A lot of people died in Russia that summer, either directly from the heat and the extremely large and long-lasting fires, or indirectly from the smoke-polluted air. Official and unofficial statistics on the impact of this heat wave differ strongly. According to official statistics 65 people died and 1,068 suffered injuries due to effects of the fires. The unofficial numbers are much higher. For example, in Moscow alone the daily mortality rate jumped from 360-380 people in July 2009 to 700 people in July 2010. Around 14,000 deaths resulted from the summer heat, with half of them in and around Moscow alone.

The death toll in provincial Russia may be higher than in Moscow because Moscow, unlike many small towns and villages, was spared of the direct effect of the fires. Besides, damage to the affected population’s health did not end when the fires abated; for many smoke inhalation and excessive heat will have a long-term health effect. For the entire nation a death toll of 55,000 related to this heat wave has been reported.

Populations do, however, adapt to continued higher temperatures through behavioural change and autonomous physiological change. For this reason, populations are most often vulnerable to unusually hot or cold weather, relative to what they are acclimatized to, rather than hot or cold per se. The optimum temperature from a health perspective, i.e. the lowest number of deaths, is different in different parts of the world.

In Finland, the optimum temperature has been calculated at 14°C, in London around 20°C and in Athens around 25°C. Clearly, citizens in Athens suffer more from a particular cold weather spell than citizens in Stockholm. On the other hand, the Stockholm citizens are more affected by a heat wave than those in Athens. In fact, the effects of warm temperature on mortality from cardiorespiratory causes may not be the same from one part of the country to another. For England and Wales it was shown that in the most vulnerable districts, those in London and south/southeast England, odds of dying from cardiorespiratory causes increased by more than 10% for 1°C warmer temperature, compared with virtually no effect in the most resilient districts in the far north. It has been estimated that the heat waves in 1976 and 1995 were associated with a 15% increase in mortality in greater London compared with an increase of 8-9 % in the rest of England and Wales.

In Europe, most summer heat waves over the period since 1986 were associated with significantly elevated mortality. Excess mortality was particularly high during the hot summer of 2003, in many countries in Central and Western Europe. Not in the Czech Republic, however: in this country mortality due to the 2003 heat waves was less than during previous heat waves in the 1990s. This is partly due to positive health-care and other socio-economic changes in the post-communist central European region over the past decade, as well as a better public awareness of heat-related risks due to enhanced media coverage and regular biometeorological forecast and warnings.