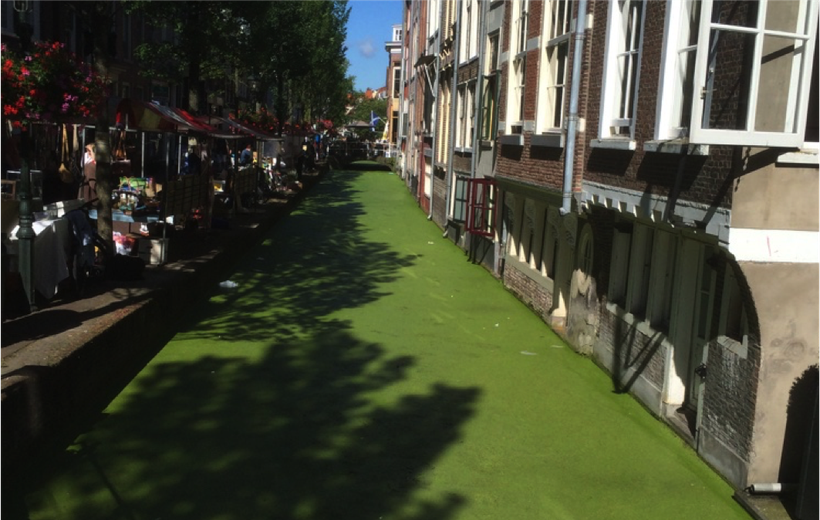 Green water under a blue sky. Water in the canals of Delft, a lovely medieval town in the Netherlands, turned green this summer. A very strange, yet o so familiar sight in many densely populated areas of the world, caused by warm water and high nutrients input.

It is not very likely that climate change will greatly increase diseases related to water quality, however. Pollutants such as toxic algae and pathogens already cause diseases and will continue to do so under climate change.

In temperate seas such as the North Sea harmful (toxic) algal blooms will probably increase as a result of climate change. Micro algae form the basis of the marine food chain. However, toxin-producing species may seriously disrupt the food web and lead to fish kills and human intoxication. Future toxic phytoplankton blooms may further devaluate ecosystem deliverables such as fish production or recreational use. Warming of near-shore waters, along with surface temperature rises in lakes and rivers could increase incidences of toxic algal blooms and infectious bacterial diseases throughout Europe. Contact with polluted water can trigger skin and gastrointestinal irritations and can even cause liver damage and other serious types of health disorders.

Heavy rainfall events may lead to more runoff and storm water overflow, and thus to marked decline in microbiological quality of inland and marine recreational waters. However, the epidemiological evidence of infectious disease associated with recreational water contact is that it is generally very mild and not likely to cause significant disease burden in the population.