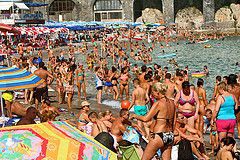 According to a recent study, the chance of extremely hot summers would have increased dramatically since the 2003 European heat wave.

The chance of extremely hot summers such as the 2003 European heat wave has been studied based on an ensemble of models and four climate change scenarios. This was done for the same area that was hit by the 2003 heat wave, including the countries where heat-related mortality peaked (France, Germany and Italy).  It was found that although summers as warm as 2003 are still rare, they are now much more likely to occur. Events that would occur twice a century in the early 2000s are now expected to occur twice a decade. For the more extreme heat wave of 2003, the return time would have reduced from thousands of years in the late twentieth century to about a hundred years in little over a decade. As climate warming continues, the frequency of extreme hot events is expected to increase further.

Different climate change scenarios all indicate that by the 2040s a summer as hot as 2003 will be very common. In fact, the scenarios with the strongest anthropogenic influence suggest the 2003 summer will be deemed an extremely cold event by the end of the century.