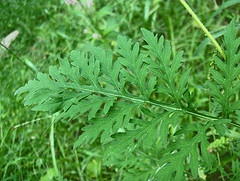 Allergenic diseases caused by pollen may appear earlier in the year and may also increase. An example of the latter is the invasion of common ragweed (a native in North America) into Europe since the end of the nineteenth century.

Model simulations for 2041–2060 compared with 1986–2005 under both a high-end (RCP 8.5) and a moderate (RCP 4.5) climate change scenario show that future ragweed airborne pollen loads are likely to increase in large parts of Europe owing to the synergistic effects of climate change on habitat suitability, pollen production, release and transport, and the infilling of existing suitable habitats due to seed dispersal. It was estimated that seed dispersal accounts for about a third of the future airborne pollen increase irrespective of climate change, whereas climate change explains the other two-thirds.