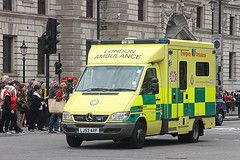 The effects of warm temperature on mortality from cardiorespiratory causes may not be the same from one part of the country to another. This was concluded from a study where these heat stress effects were quantified for all 376 local authority districts in England and Wales for the period 2001-2010. It was shown that in the most vulnerable districts, those in London and south/southeast England, odds of dying from cardiorespiratory causes increased by more than 10% for 1°C warmer temperature, compared with virtually no effect in the most resilient districts in the far north.