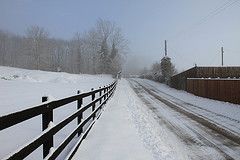 Excess winter deaths (EWDs) are causally attributed to seasonal variations in temperature, with low temperatures thought to cause death directly (for example, through hypothermia or falls in icy conditions) and by altering vulnerability to communicable or non-communicable diseases, such as influenza and myocardial infarction, which are more common in winter.

A recent analysis of data over the past 60 years for England and Wales has shown, however, that the link between winter temperatures and EWDs may no longer be as strong as before and that how harsh a winter is no longer predicts how many EWDs there will be.

It was concluded that the association of year-to-year variation in EWDs with the number of cold days in winter (<5°C), evident until the mid 1970s, has disappeared, leaving only the incidence of influenza-like illnesses to explain any of the year-to-year variation in EWDs in the past decade. This was related to better housing, improved health care, higher incomes and greater awareness of the risks of cold over the past few decades.

The researchers who carried out this analysis state that many of the papers that concluded that climate change would lead to fewer EWDs are not recent and rely on relatively old data. According to them the correlation between the number of cold winter days per year and EWDs, which was strong until the mid 1970s, no longer exists. In addition, they conclude that no evidence exists that EWDs in England and Wales will fall if winters warm with climate change. Instead, the absolute number of EWDs may increase in the coming decades due to an increase in future winter temperature volatility and because of a growing and ageing population.