Streamflow and thermal habitats of freshwater fishes under climate change 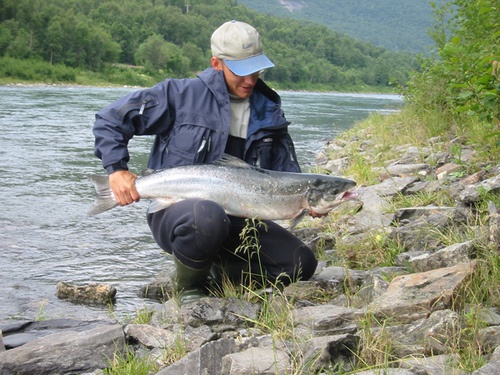 Climate change will affect future flow and thermal regimes of rivers. This will directly affect freshwater habitats and ecosystem health. In particular fish species that are strongly adapted to a certain level of flow variability will be sensitive to future changes in flow regime. In addition, all freshwater fish species are exotherms, and increasing water temperatures will therefore directly affect fishes’ biochemical reaction rates and physiology.

Climate change significantly affects river flow regimes for 90 % of the global land surface area, compared to 25 % of the land area where flow regime is affected by dams and human water withdrawals.

Projections have been made of global streamflow and water temperature changes for 2031–2060 and 2071–2100, compared with the control period 1971–2000, for the SRES A2 and B1 emissions scenarios and 3 Global Climate Models.

Overall, climate change will result in an earlier onset of the high flow (snowmelt) peak, especially in the high northern latitude zone. For 2031–2060 and 2071–2100 this earlier onset is projected to be more than 30 days for 8–10% and 10–12 % of the global surface area respectively, compared with 1971–2000. Substantial declines in mean streamflow are projected for the U.S., Europe, Southeast Asia and southern parts of South America, Africa and Australia.

Climate change will further increase river temperatures during the 21st century and will result in strong declines in low (summer) flow for the end of the 21st century in large parts of the world. This combination could in particular threaten fish populations. The loss of areas with suitable freshwater habitat conditions may partly be compensated, however, by areas that will become suitable for freshwater species in the future.

A northwards movement of the 21.5 °C-isoline was quantified of approximately 190–400 km for the northern hemisphere; besides, the global surface area where high water temperatures are below 21.5 °C for 95% of the time was shown to reduce from 39 % in 1971–2000 to 32–35 % in 2071–2100. Hence, climate change is likely to reduce the spatial area of suitable habitats of cold water fishes, which could be invaded by cool or warm water species if other habitat requirements (e.g. food availability) are also fulfilled.

To what extent changes in streamflow and thermal habitat conditions will affect species distributions depends on the adaptive capacity of fish populations. More knowledge of these adaptive capacities is needed to develop adaptation strategies. Anthropogenic activities that affect the quality of the river systems habitats, such as water extractions during low flow periods, and thermal pollution, should be minimized.