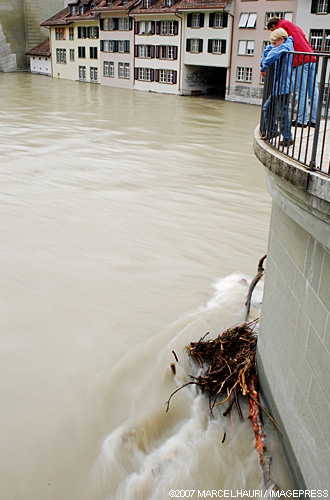 At the regional level, the impact of climate change was assessed for Europe combining indicators of climatic and non-climatic change. This was done for heat stress, flood risk and forest fire risk. The assessment was based on outputs from a number of high-resolution regional climate models based on the SRES A1B emission scenario. Indicators representing climate exposure and sensitivity were combined for each hazard for three time windows: the baseline situation (1961–1990), a short-term scenario 2011–2040, and a medium-term scenario 2041–2070. In addition, an indicator of adaptive capacity was developed and compared with the overall impact to identify the potentially most vulnerable regions.

The indicator for heat stress in relation to human health was calculated measuring climate exposure by summer days (with a maximum temperature of above 25°C) and tropical nights (minimum temperature not below 20°C). The indicator for river flood risk was calculated from inundation extent and water depth for the 100-year return level of river discharge (with flood simulation model LISFLOOD). As proxies for climatic conditions that influence forest fire risk, consecutive dry days as well as summer temperature and precipitation were used.

Adaptive capacity was defined as a function of financial capital (economic productivity and income equality), human capital (educational achievements and health services), and technological capital (research and development, and internet use).

According to these results, heat stress potential impact for the baseline period is highest for Italy, parts of Greece, southern France, and major parts of Germany, and, slightly less, the southern UK, Belgium, Portugal and Spain. A distinctive pattern is seen for highly urbanised regions, such as London, Hamburg, Berlin, Prague, Vienna, Budapest, Bucharest, Athens, and Madrid, which stand out as (very) high impact regions in relation to their neighbouring regions. For the short-term scenario (2011–2040) heat stress is projected to further increase, particularly in Germany, France, and Bulgaria and southern Romania. For the medium-term scenario (2041–2070), the trend towards increasing heat stress is projected to continue for most parts of Europe, but especially in central Europe.

Presented results on heat stress differ from results of previous studies. The latter studies have identified southern Europe as generally most heavily affected in the future (cf. Fischer and Scha¨ r, 2010); presented results, however, indicate that the largest projected future impacts will occur in central Europe (e.g. Germany, France) and in Italy. This can be explained by the shares of old people and of old people living alone, which are projected to increase considerably stronger for instance in Germany than in Spain. Besides, people living in warmer climates (i.e. southern Europe) might currently be better acclimatised to heat.

According to these results, current river flood risk reveals a scattered picture throughout Europe, with highest risks in central Europe, in parts of England, eastern Europe, and northern Italy. Clusters of high or very high risk are found e.g. along the course of the Danube from southern Germany through Austria/Slovakia and Hungary to southern Romania/northern Bulgaria, the regions along the Rhine from south-western Germany to the North Sea, and for the Po-area in northern Italy. The Alpine Regions (e.g. in Austria) are at high risk too. Regions where results indicate increasing future risk are located in the western and central parts of Europe, while decreasing flood risk is projected for north-eastern Europe (e.g. for most Polish regions). These results are likely to underestimate the actual future risk of damages from river floods since for 2011–2040 changes in assets at risk were only partly considered while flood risk for 2041–2070 is solely driven by projected changes of extreme flood events.

The results for the forest fire risk indicator show a very high fire risk for virtually all regions in the southern European countries of Portugal, Spain, Italy, Greece, and in parts of Bulgaria. Within France a gradient from very high fire risk in the south to a medium risk in the north is seen. Single, scattered areas of high risk are further found in central and eastern Europe, in particular in (south)-eastern Germany, Poland, Czech Republic, the lowland areas of Austria, and Hungary. In contrast, Ireland and the UK, the Alpine region, the Baltic States and most parts of Scandinavia show low or very low fire risk. For the short-term scenario 2011–2070, an increase in fire risk is revealed in particular in major parts of France, Germany, Belgium, the southern Netherlands, southern Sweden and Finland, as well as for Romania and Bulgaria. The northwards expansion of very high and high fire risk continues for the period 2041–2070, with major parts of Germany, Poland, Czech Republic and Hungary now highly affected.

As far as the capacity of European regions to adapt to these impacts is concerned, crucial areas with very high impact but very low adaptive capacity are found in southern Portugal, Spain and Italy, in Greece and in Hungary. The future scenario for 2041–2070 reveals an increase in the number of potentially most vulnerable regions, given adaptive capacity at current levels. New hotspot regions due to projected climate change would be found mainly in Bulgaria, Romania, Czech Republic, Poland, and France, while other regions are projected to turn into ‘more severe’ hotspot regions, that change from high to very high impact (e.g. in southern Romania and northern Bulgaria or in (north)-eastern Germany.