What changes flood risk in Europe? Reflections from a reinsurance perspective 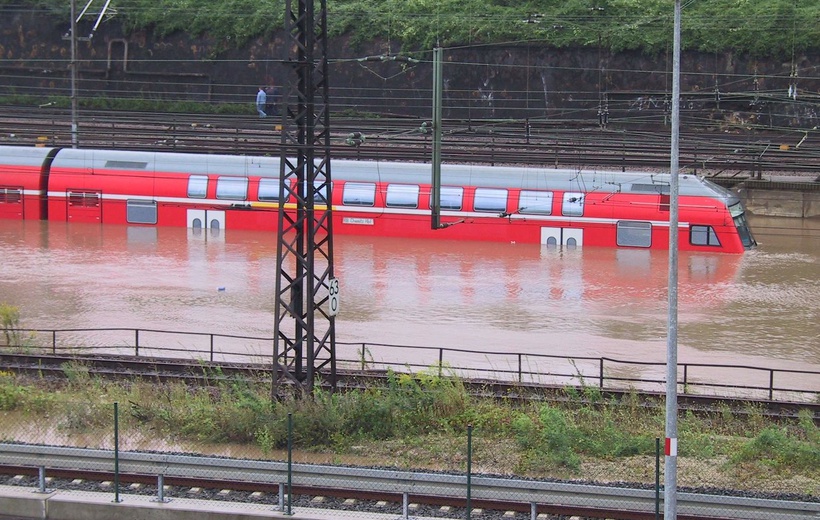 Flooded central station in Dresden in the summer of 2002. The 2002 summer flood event is the most expensive flood disaster ever recorded in Europe (photo: Photura, www.flickr.com).

Climate change is now in the spotlight worldwide. As a result, a natural disaster may be associated with climate change too quickly, and incorrectly. Even though the changing climate is already leaving a signature on many hazards, whether this leads to an increase in the size or frequency of natural disasters depends on many factors that often are not related to the climate at all. We need to reflect on all of these factors in order to fully understand the meaning of changes in risk with respect to a natural hazard.

Hazards are not disasters per se

In a recent article we stressed the difference between hazards and disasters. A hazard will only turn into a disaster when people or their assets are both exposed to this hazard and vulnerable to its consequences. Where risks of weather extremes are increasing, this is often due to more exposure and more vulnerability, not so much a change in the weather extremes themselves.

Experts from reinsurance company Munich RE reflected on changes in flood risk in Europe from this perspective, by analysing flood risk data of their own NatCatSERVICE (NCS) database. This database is among the world's largest on losses caused by natural extreme events.

Many reasons why flood risk changes

The experts summarize all factors that may lead to a change in flood risk. First there is land-use and land-cover change, and an increase or decrease in exposed values and their vulnerability. More people and more assets in a flood prone area mean more flood losses, and a higher flood risk. In many cases, the wealth in flood-prone areas has accumulated and the damage potential has increased.

Second, there is risk perception. Flood control measures create an unjustified feeling of security that leads people to expose more and more objects of value to the risk of flood. If a flood event does occur, an immense loss potential suddenly emerges. Flood protection creates the illusion of safety and “encourages” communities to overdevelop the protected flood-prone areas.

Third, in addition to risk perception, there is behaviour of the people concerned. People like living close to streams and rivers. The hazard associated with this is soon forgotten if no major flood event has happened for some time. Due to a lack of adequate awareness, in the face of a threatening flood, owners are reluctant to move items of property even though they are movable, and this often delays their evacuation. Examples are heavy washing machines and freezers filled with food. The chances are high that eventually it will be too late to save them.

Fourth, there is climate change. Heavy precipitation events have become more intense in the northern part of Europe and less intense in the southern part, and they are likely to become more frequent in the future. On account of the large proportion of impervious surfaces in urban areas, the torrential rain often runs straight into the drainage systems, which are not designed to cope with such abundant water volumes, with the result that underpasses, cellars, and sometimes even subway tunnels are flooded with water.

And, of course, improved flood control and flood protection have already reduced flood risk. Unfortunately, the effects of climate change and land-use changes that tend to aggravate losses, and those of protection works that are aimed to reduce them cannot be separated from each other in the available flood statistics.

A proper look at flood risk

You cannot just compare flood statistics of 30 years ago with those of today and draw conclusions on the factors that have changed flood risk. Flood risk will have changed simply because of economic development. Consumer prices of the same assets of 30 years ago are now much higher (inflation), and the number of assets in the same flood-prone areas has generally grown. For a proper comparison of disasters at different times, you have to correct the losses for inflation and for changes in urban development.

The latter is called normalizing events to one specific year. This makes it possible to compare figures of the past with those of today. This can be done by using changes in regional gross domestic product (GDP), as a proxy for changes in wealth and hence changes in urban development in flood prone areas.

No fingerprint of climate change

By looking at flood risk this way, changes in flood losses in Central Europe in time are so small that they can be attributed to many causes including, but not limited to, climate change. Causes may be a loss of retention areas in catchments, immediate drainage of urban areas, changes in river training, to name a few.

This proper look at flood risk brings the experts to the well-known statement by Gilbert White (1945): “Floods are acts of God, but flood losses are largely acts of man”.