The vulnerability of Pyrenean ski resorts  to climate change 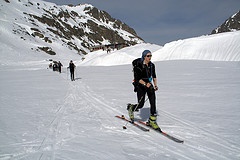 Average minimum snow depth to operate a ski resort is assumed to be 30 cm. Ski resorts reaching the 30-cm threshold during at least 100 days per winter season (natural and artificial snow combined) are considered as being reliable. At present, 83% of the ski resorts are considered naturally reliable in an average winter season, and 98% when snowmaking capacity is taken into account. Assuming a future increase of 2°C in winter mean temperature, this share would be reduced to 44 % (85% including snowmaking). Under 4°C winter temperature increase the total share of reliable ski resorts in the Pyrenees would be dramatically reduced to only 7% (and no improvement with snowmaking).

Snowpack is most affected by climate change in the eastern part of the Spanish Pyrenees; south-oriented slopes are most vulnerable. Pyrenean ski resorts closer to the Atlantic Ocean, located at higher elevations, and/or with northerly orientation are most resilient. Spatial distribution of snow in mountain areas is characterized by high variability within very short distances due to complex interaction between meso-scale meteorology, local topography, and weather factors.

Snowmaking cannot completely solve the problem for all ski resorts in the Pyrenees, as the measure can only act as a robust adaptation strategy in the region provided climate change is limited to +2 °C snowmaking.