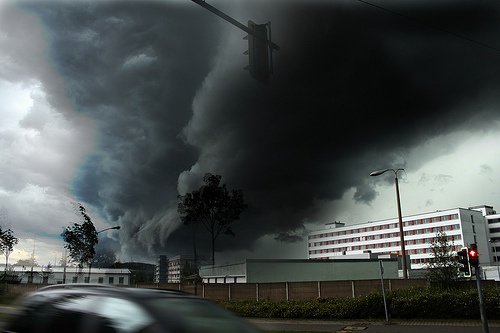 For Europe, current estimates of storm loss for a single 10-year storm event reach USD 7 bn (2006 prices), increasing up to USD 30 bn for events with a return level of once per 100 years. Average annual storm-related insured losses to residential buildings in Germany add up to about EUR 1.1 bn.

The impact of global warming on winter storm losses in the German private household sector was estimated from model projections based on the A1B scenario with focus on the period 1971–2000 for recent climate conditions, and for 2011–2040, 2041–2070, and 2071–2100 for future climate conditions. It was assumed that no adaptation measures were anticipated.

The change in winter storm losses was expressed as the change of the so called ‘return level’ of loss amounts for an event of a certain magnitude. More precisely: for a given ‘return period T’ (say 10 years) the so called ‘return level’ is that loss ratio (the ratio between claimed loss amounts and insured values), which would occur after an average waiting time T due to an event of that magnitude or larger.

Overall the results show a modest increase in return levels and shorter return periods due to global warming for Germany; these results are in line with projected changes of return periods of estimated losses for Germany and nearby countries under several SRES scenarios. The 10-year return values (i.e. loss ratios per return period) are projected to increase by 6–35 % for 2011–2040, 20–30 % for 2041–2070, and 40–55 % for 2071–2100. These changes are much smaller than the widths of most of the 95 % confidence intervals, however. For less frequent events, changes of return levels are of similar or larger order of magnitude as for a 10-year event.

From these results it was concluded that global-warming induced increases in insured losses under the A1B scenario are generically to be expected, but can be handled within the existing insurance frameworks in Germany.