More heat stress for cattle, less milk and meat for us 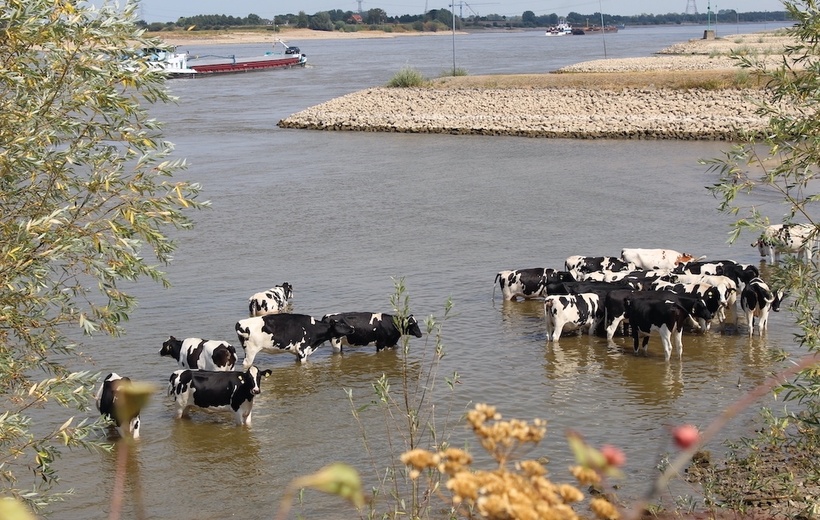 Photo: Cattle cooling down in the river on a hot day.

Heat stress affects the production of milk and meat by cattle. Cattle can experience thermal stress at temperatures higher than 20°C. At higher temperatures, animals reduce their feed intake by 3–5% per additional degree of temperature, reducing productivity. Heat stress, therefore, has adverse effects on the economic performance of dairy and beef production systems.

These effects have been quantified on a global scale. This was done by estimating changes in dry matter intake in cattle under climate change, including four types of feed: grazed grass, crop residues, grains, and other feeds. These changes in dry matter intake were converted into changes in energy intake. Subsequently, these changes were related to estimates of losses in meat and milk production for an individual adult animal. In a next step, global information was included on cattle production systems, animal numbers for the year 2005, and region-specific and system-specific animal diets. The estimates have been made for early-century (2005), mid-century (2045), and end-century (2085) climates under a low- and high-end scenario of climate change.

According to the results of this study, global production losses of meat and milk from heat stress are between $15 billion (low-end scenario) and $40 billion (high-end scenario) per year by the end of the century (price level 2005). This agrees with between 3.7% and 9.8% of the value of production of meat and milk from cattle in 2005. Projected losses are higher for meat production than for milk production. In both scenarios, losses in most tropical regions are projected to be far greater than they are in temperate regions.

Already by mid-century, and even under a low-end scenario of climate change, considerable adaptation will be needed to avoid substantial heat-stress-induced losses in milk and meat production. Breeding and cross-breeding strategies are one way to adapt to climate change; there are significant differences among breeds in their ability to cope with heat stress. In tropical regions, switching from cattle to more heat-resistant and drought-resilient camels is another alternative. Low-cost strategies to reduce heat stress impacts include the use of simple sheds to provide shade, bathing animals several times each day, and installing electric fans in sheds. Also, shade trees in tree–livestock systems can be highly effective. Alternative cooling, ventilation, and building-design can be effective for more intensive cattle production systems in which animals are (seasonally) confined.