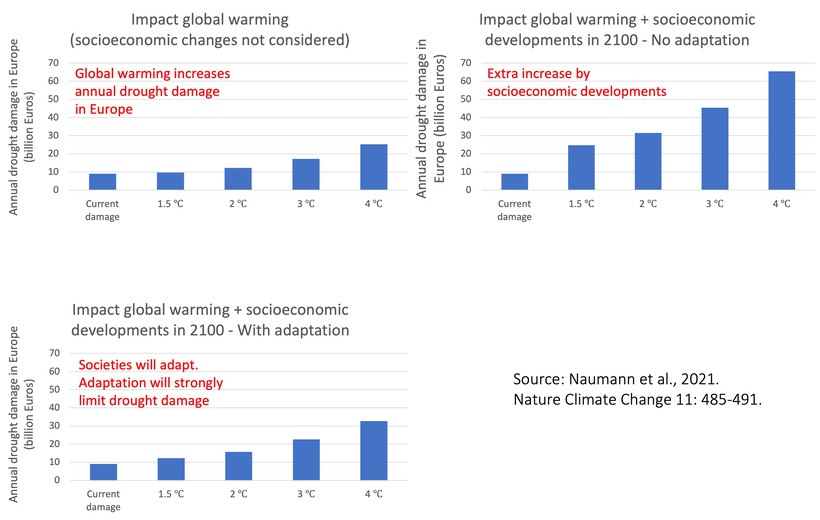 Graph: Annual damage of droughts in Europe is now €9 billion per year. Without adaptation, a 3,5 times increase at 2°C global warming is projected in 2100. With adaptation, the impact is much less.

Since the 1950s, the patterns of drought across Europe are changing. Northern Europe is getting wetter while southern and eastern Europe seem to be getting dryer. Droughts could become more frequent, more severe, and longer lasting in parts of Europe, especially in the south.

What about future trends?

A European-wide study has been carried out to project how these trends continue. These projections have been made for four levels of global warming: 1.5, 2, 3 and 4°C. In addition, the impacts of socio-economic developments have been included, and scenarios of societies adapting to longer lasting and more intense droughts, and thus reducing their vulnerability to droughts.

Future drought projections have been calculated from an ensemble of climate projections from 11 combinations of global and regional climate models. Direct economic losses from droughts have been estimated from reported losses of past drought events and expert knowledge. These estimates do not include indirect effects on business production and the flow of goods and services. Economic and budgetary projections for the European Union have been used to include long-term demographic, land-use, and sector productivity dynamics.

In this study, Europe is defined as the European Union plus the United Kingdom.

The results show a clear regional contrast in the evolution of future drought risk in Europe with global warming. Drought impacts will strongly increase in southern and western Europe, and strongly decline in northern and northeastern regions. A north-south divide will develop where especially crop productivity and hydropower production will strongly decline in southern Europe, and the suitability for growing crops and hydro-power potential will increase in the north.

At 1.5°C global warming, drought frequency likely increases over half of the Mediterranean and one-fourth of the Atlantic region. At 4°C global warming, drought frequency is projected to double over nearly 60% of Mediterranean, 40% of Atlantic and 10% of continental Europe. The uncertainty of these numbers is large, however. In boreal Europe and northeastern parts of continental Europe, drought hazard will decline; precipitation increase will likely outweigh the increase in evaporative demand due to global warming. In central and eastern Europe, the projections also indicate a trend of declining drought intensity, but these trends are less strong.

Currently, agriculture losses account for more than 50% of total drought losses in Europe, with the highest sector share in the Mediterranean region (60%) and the lowest in the boreal region (39%). Impacts to the energy sector represent 23% of the total damage, to public water supply between 8% and 20%, to infrastructure subsidence around 8%, and to the transport sector (inland water transportation) 2%.

The strongest rise is projected for the Atlantic region and, albeit slightly less, the Mediterranean. The projected increase is relatively strong for Greece, Belgium, Cyprus, France, Ireland, the Netherlands, Portugal, and Spain. The boreal region will experience a strong decrease in drought losses, which drop to 20% of current values at high levels of global warming. This drop is large in all Scandinavian countries, the Baltics and Poland. Drought losses remain stable in Denmark and Germany.

Direct economic losses are fairly small compared with the total size of European economies and remain mostly well below 1% of total GDP. Economic impacts are relatively high for agriculture, however, up to more than 10% in the Mediterranean at high levels of global warming.

When we add scenarios of socioeconomic developments to the impacts of global warming, projected drought damages in 2100 are much larger: €25, €31, €45, and €65 billion per year at 1.5, 2, 3 and 4°C global warming, respectively. Again, the strongest increases in absolute drought losses are projected for western and southern parts of Europe. Remarkably, the share of the agriculture sector in total drought losses will gradually reduce throughout Europe because agriculture will likely become less important for future EU economies compared with the current situation.

These numbers are based on the assumption that future economies are as vulnerable to droughts as they are today. This is highly unlikely. Societies will adapt. Crops will be developed that are more resistant to water shortage, and water-use efficiency in hydropower production will be improved. Future developments that reduce vulnerability to droughts will probably halve these drought losses in 2100. As a result, drought losses may be even lower in 2100 than they are today in several European countries, even at high levels of global warming. In Bulgaria, Spain, Portugal, Cyprus, France, Ireland, Greece, and Belgium, droughts will still have a stronger impact on the country’s economy compared with now. Additional adaptation efforts will be needed in these countries to further restrict the economic impacts of future droughts.