Sea-level rise determines the future of our deltas 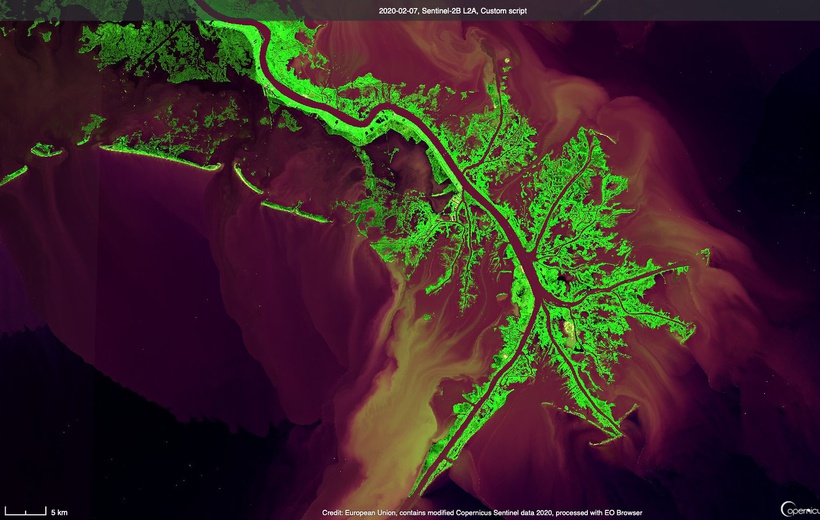 The Mississippi Delta. The river still determines the shape of this delta, but that may change. Photo: European Union (Copernicus, processed by Tom Yulsman; www.flickr.com)

The future of our deltas is uncertain. Anthropogenic impacts on deltas go much further than the adverse effects of sea-level rise. Many deltas are sinking because of large-scale, long-term abstraction of groundwater, and in some cases fossil fuels. Land subsidence often exceeds current sea-level rise. In addition, in many rivers, dams trap part of the sediment coming from upstream, reducing sediment supply to the deltas. Deforestation, on the other hand, may increase sediment production in the catchment and sediment supply to the delta.

In a recent study, the combined impact of all these drivers was estimated by using a relatively simple model of schematized deltas in which future changes in the form of these deltas were calculated from projected changes in relative sea-level rise and fluvial sediment supply. The model was applied to 6,402 deltas under a low-end, moderate, and high-end scenario of climate change.

From growing to shrinking deltas

The authors conclude that, at the global level, deltas gain land if relative sea-level rise is less than about 5.5 mm per year. Deltas will erode, and global delta land area will decrease if that rate is exceeded. This figure includes the effect of man-induced changes in fluvial sediment supply. Without human impact on sediment supply, deltas would continue gaining land until a relative sea-level rise of 6.5 mm per year.

At the global level, the major disturbances of human interventions on fluvial sediment supply have apparently accelerated the switch from land gain to land loss by only 1 mm per year sea-level rise. The effects of disturbed sediment flows on individual river deltas can be much larger than this global average, however. At the global level, the effects of less sediment supply due to river dams and more supply due to deforestation partly cancel each other out.

From 1985 to 2015, delta land gain has slowed down mainly because of sea-level rise. This decrease is expected to result in a net land loss once the rate of sea-level rise has reached 5.5 mm per year. By the end of the century, sea-level rise will be the dominant driver that determines the future of our deltas. According to this study, sea-level rise under a high-end scenario of climate change will lead to the disappearance of about 5% of total global delta area by the end of this century. In addition, waves and tides more and more leave their mark on the shape of deltas at the expense of the influence of the river.

Naturally, there are a few caveats here. One of them being the fact that the estimates of sediment flows in rivers are highly uncertain. Part of the sediment flow, the sand and gravel that moves near the riverbed, is in fact left out. Still, this study presents an indication of the direction the world’s deltas may be heading for. The results agree with a previous study on the future of our deltas.