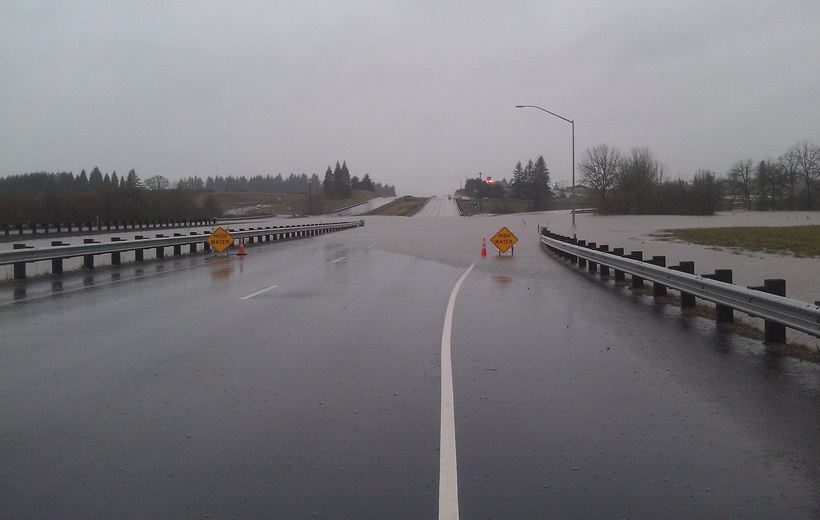 Large-scale river flood risk of the European road network has been assessed for the present climate. This was done with a new approach where the impact of flooding on roads as individual objects was assessed. In addition to the continental-scale assessment, flood hotspots were identified within the European motorway network. All three components flood hazard, exposure and vulnerability that make up flood risk were modelled. This was done for all river sections with an upstream area larger than 500 km2. The effects of river and flash flooding in the most upstream catchments, with an upstream area smaller than 500 km2, were left out. Also the effects of pluvial and coastal flooding were not included.

The assessment covers the 27 member states of the European Union (EU) (excluding Cyprus and Malta); the United Kingdom and the European Free Trade Association countries of Liechtenstein, Norway, and Switzerland (not Iceland); and the (potential) candidate countries of Albania, Montenegro, North Macedonia, and Serbia.

According to this assessment, the expected annual direct damage from large river floods to road infrastructure in Europe is about € 230 million per year (2015 price level). Motorways contribute 26 % to this damage. The other contributions are 7 % for trunk roads, 22 % for primary, 15 % for secondary, 7 % for tertiary, and 23 % for other roads. The 90 % confidence interval of this estimate is € 89 million - 373 million per year.

Flood hotspots in the EU network

River flood risk of the road network is highest in Germany, France, and Italy: € 45 million, 43 million, and 23 million per year, respectively. In these countries, the risk is concentrated around the rivers that rise in the Alps and then flow through regions with dense road networks, such as the Danube and Rhine flowing through southern Germany, the Rhone flowing through south-eastern France, and the Po flowing through northern Italy. These three countries have additional flood hotspots in the Elbe River, Garonne River, and Tiber River basins, respectively.

Another concentration of high flood risk is found on the Scandinavian Peninsula. The sparse road networks in these countries can potentially be inundated with large water depths, causing large damage.

The Czech Republic, Slovakia, Hungary, Croatia, and Latvia are also high-risk regions. Although these countries contribute little to the total damage in Europe, the relative impact of road disruptions in these countries is large.

The Netherlands stands out

The aggregated flood risk of the road network in The Netherlands is among the lowest of Europe. Still, many of the Dutch motorways can potentially be inundated. Flood risk in the Netherlands is low due to the very high river flood protection standards (return period of 1:1000 years or higher in most places), which make the likelihood of flood events very small. If a flooding were to occur, however, many roads would be inundated with large water depths, causing large damage and severe complications for evacuation.

To put things into perspective, river flood risk of the European road network is a relatively small part of total flood risk. Total river flood risk, in terms of direct damage to infrastructure, buildings, etc., has been estimated to be € 4 to 6 billion per year (Alfieri et al., 2016b; Jongman et al., 2014). Thus, the estimate of annual road damage by river flooding is ‘only’ 3.8 % to 5.8 % of the total damage. This agrees with results of other studies: this infrastructure share of total flood damage is usually in the order of 5 % to 10 %.

Other aspects of flood risk

The numbers above refer to direct, tangible damage only, including clean-up and repair of roads and traffic management systems, damage to vehicles, and costs of evacuation and rescue operations. Flooding also leads to direct intangible damage: fatalities, injuries, and inconvenience. In addition, there are many indirect adverse effects of flooding, such as economic damage from delayed freight and persons, societal disruption, and undermined trust in public authorities.