Loss of sea ice in the Arctic: Sad testimony of climate change, good news for the economy 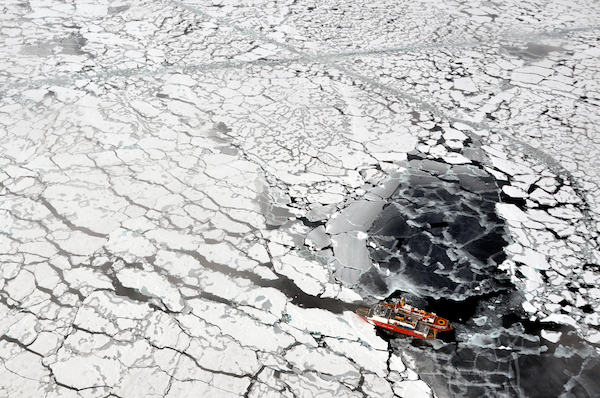 The global economy depends on global ship navigation. Over 90% of goods traded internationally are shipped by sea. The Panama and Suez Canals are vital corridors for global ship traffic, but things are changing. New ship navigation routes are opening across the Arctic. The Northwest Passage, Northern Sea Route and Transpolar Sea Route are names of routes across the Arctic along which navigability is increasing because of climate change reductions in sea ice. This sad testimony of climate change is good news for the global economy. A more accessible Arctic will create new opportunities for shorter maritime trade routes.

Over the past five decades, summer sea ice extent in the Canadian Arctic has decreased by 5-20% per decade. The proportion of multi-year ice has also reduced. Shipping in the region is increasing, primarily driven by increased access to natural resources and fisheries, tourism opportunities, and trans-Arctic trade.

For the Canadian Arctic, changes in navigability have been projected for 2 and 4 °C of global warming above pre-industrial levels. The length of the season in which sea ice cover has decreased enough to allow shipping will greatly increase. Largest increases are projected for the Beaufort region, to the north of Alaska and part of the Northwest Passage. In this region, the sea ice ship-accessible season will last 100-200 days at 2 °C to 200-300 days at 4 °C of global warming. This largely results from the change of a multi-year ice regime to a seasonal first-year ice regime, a change that is already well underway in the Beaufort Sea.

Above 2 °C of global warming, ship navigation along the major trade routes in the Arctic will be possible each summer, and this season can be increased by up to 1-2 months by operating under, as the authors of this study state, ‘marginally unsafe conditions’ related to mobile ice. In parts of the Arctic, multi-year ice will not disappear completely even under 4°C warming, and the operational shipping season will remain relatively short.

The advantage of more ship navigation across the Arctic for the global economy not necessarily means a positive outcome for local communities. On the one hand, people in northern Canada may receive resupply more often, leading to lower food prices and lower rates of food insecurity in the region, for instance. On the other hand, they absorb the risk associated with increased ship activity, such as pollution and adverse impacts on ecosystems. These detrimental effects add to the adverse consequences of the loss of sea ice, including limitations to intercommunity travel and access to traditional hunting grounds, and a higher vulnerability of infrastructure and buildings because storm waves increase when sea ice extent decreases.