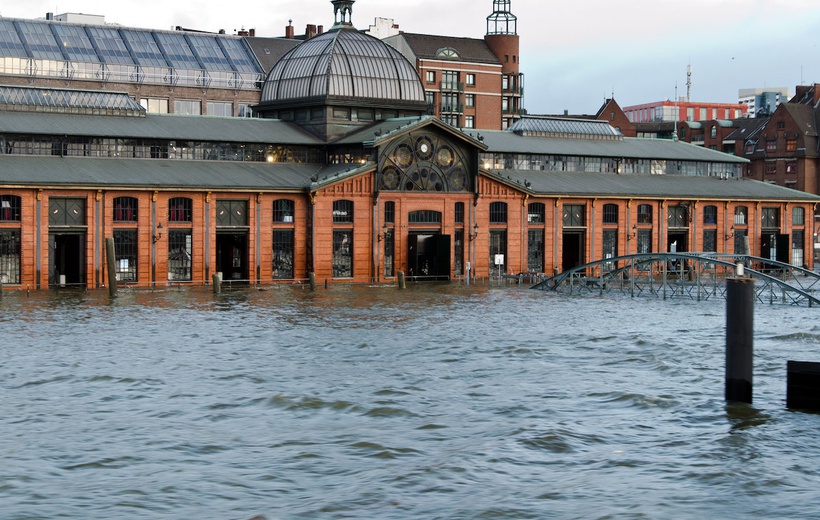 The German city of Hamburg is an example of a city where storm surge at the coast and high discharge of the river Elbe sometimes combine into compound flooding of low-lying residential areas outside the dikes (photo: compidoc, www.flickr.com).

There are two mechanisms that may cause such events. First, high coastal water levels may affect river flows and water levels by backwater effects or by reversing the seaward flow of rivers, particularly in low-lying areas. Second, high coastal water levels and high river discharge may stem from a common meteorological driver. Severe storm periods may be associated with high winds leading to storm surges, and at the same time with high precipitation followed by inland flooding.

Compound flooding may lead to significant impacts and much more disastrous consequences than each of these extremes individually. The occurrence of compound floods from extreme coastal water levels and peak river discharge was studied for northwestern Europe, along the coastlines from France to Sweden. Datasets were used for locations at the North Sea and the Baltic Sea covering most of the previous century.

In the definition of compound floods, water level extremes at the coast and in rivers do not have to occur at exactly the same spot and the same time. The impact of a storm may be noticed in river discharge a couple of days later than in storm surge levels at the coast because it will take some time for rainfall to reach the river. Also, the river outlet may be far from the area where the storm hit the coast. In this study a flood event was called a compound event when high water levels at the coast and in the river were no more than 500 km apart and occurred no more than 7 days apart.

There appears to be a distinct difference between mid-latitude and high latitudes regions in northwestern Europe: compound flooding occurs more often in mid-latitude regions, along the west facing coasts of the United Kingdom, Germany, the Netherlands and Sweden. No clear explanation was given for this. There may be a link with weather oscillations that have a stronger impact on certain parts of northwestern Europe. This may explain the presence of decadal and multidecadal variability in the magnitude and frequency of compound floods. There have been compound flood-rich and flood-poor periods, like the 1960s and the 1990s, respectively.

This variability makes it difficult to find long-term trends related to climate change or other human interventions. Although no attempt was made to relate trends in compound floods to climate change, the authors stress that global warming could increase the severity and frequency of compound extremes by changes in wind speed and in rainfall intensity of severe storms.