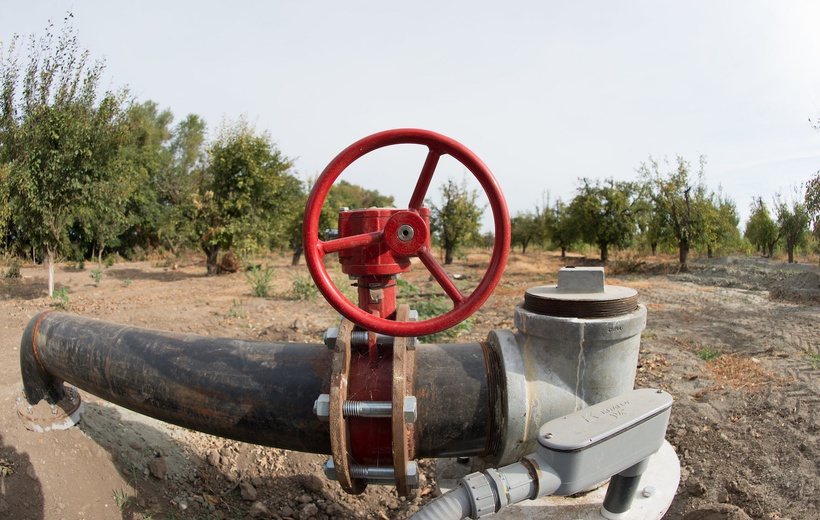 Well drilled to pump groundwater for irrigation. Part of the water extracted from groundwater reserves ends up in the oceans and contributes to sea level rise (photo: US Department of Agriculture, www.flickr.com).

During the last decade, from 2005 to 2015, the rate of global mean sea level rise was about 3.5 mm/year. About 1.3 mm/year of this is due to expanding of the oceans because they are warming up (thermal expansion). The major contribution to sea level rice is ice mass loss from mountain glaciers and both major continental ice sheets, Greenland and Antarctica. Recent estimates of this contribution of ice melt inflow to the oceans can explain about 1.8 mm/year.

So this sum of ocean mass (ice melt) and volume (warming up) increase is 3.1 mm/year. Compared with 3.5 mm/year mean sea level rise we are missing a contribution of about 0.4 mm/year. This is a significant volume of water, similar in size to the contribution from melting Antarctic ice.

Scientists recently found the missing part by analyzing satellite observations of changes in the Earth’s gravity. They showed that the amount of water stored on land in river basins has decreased and that this loss to the oceans accounts for about 0.3 mm/year.

This loss of water from sources on land may be related to climate variability or anthropogenic activity. In particular, river basins at high‐latitudes in the northern hemisphere, including the Lena, Mackenzie and Volga basins, have lost a lot of water to the oceans. There are also river basins that have stored more water, and thus mitigated sea level rise, such as the Amazon, Congo and Zambeze basins.

The results of this study contradict the results of previous studies that point in the opposite direction, like a study we’ve posted in 2016. According to the authors those previous studies were incorrect due to errors in the data they have used. The authors stress, however, that water from land resources is the most uncertain contribution to sea level change.