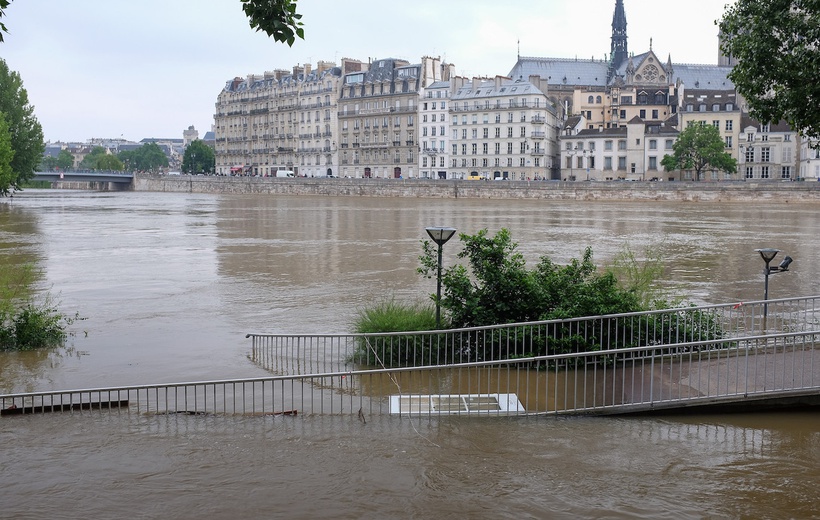 Climate change will affect the risk of river flooding in a number of ways. Risk is the probability of a river flood times the consequences of that flood. The probability will change because the processes underlying a peak discharge change when climate warms up. In most cases, flood probability increases. The consequences change as well. If climate change increases the magnitude of a flood, a larger area may be flooded, and the number of people affected, the number of casualties and the economic damage may increase as a result.

This view on the link between river flood risk and climate change is not complete, however. An important aspect is lacking. Multiple rivers in a certain part of the continent may flood at the same time because they are linked to the same weather systems, the same soil water conditions or the same changes in snowfall in their upper catchments. Climate change will affect these weather systems, and the snowfall and soil moisture conditions in neighbouring catchments. Consequently, the number of rivers that may flood simultaneously in a certain part of Europe may change. If the probability of more rivers flooding simultaneously increases in a certain part of the continent, flood risk in that part increases as well.

Changes in the spatial extent of simultaneous river floods are often disregarded in future projections of river flood risk. This aspect is highly relevant, however. The resulting damage of multiple rivers flooding at the same time can exceed the capacities of disaster recovery and insurance companies.

An analysis of high river discharge events in Europe in the period 1960-2010 shows that the spatial extent of these events occurring simultaneously is changing in response to changes in flood generation processes due to climate change. The analysis is based on a data set consisting of the timing and magnitude of annual maximum discharge for a total of 3,872 stations with catchment sizes ranging from 1 to 800,000 km2.

Increase in central Europe and the British Isles

In the period 1960-2010, the extent of rivers with simultaneous high discharges increased in central Europe and the British Isles. In these parts of Europe, the relevance of soil moisture excess as a flood generation process has increased because precipitation and soil moisture have increased. Soil moisture conditions are linked to large-scale weather patterns and change in a similar way over large areas. Thus, when soil moisture becomes a more dominant driver of high discharges, more rivers in neighbouring catchments may flood at the same time.

Changes in spatial extent and magnitude are related

If these trends persist into the future, the combination of stronger floods and larger extents is likely to increase the flood risk substantially. This highlights the increasing importance of transnational flood risk management.