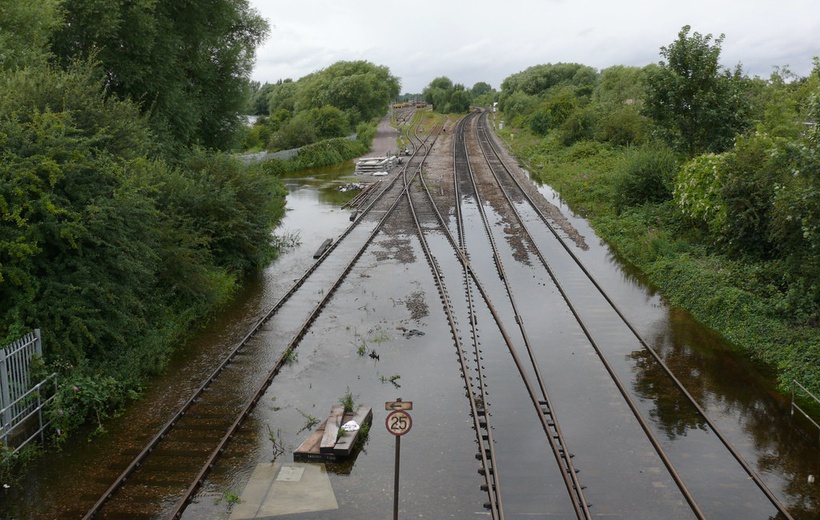 River floods can cause substantial damage to Europe’s railway infrastructure. In the period 1970 - 2005, the estimated average damage to railway tracks in the European Union (plus Norway) from river flooding was €581 million per year (spread ranging from €403 million to €801 million). This is about 11–14% of overall annual river flood losses in the EU. Flood risk to railway infrastructure in this period was highest in Germany (165 million annually) and France (106 million), followed by Spain, Sweden, the Czech Republic, Italy, and the UK.

This risk could increase substantially due to climate change: by up to 310% under a 3 °C warming scenario, according to recent estimates.

Future flood risk to railway tracks in the European Union has been estimated for three levels of global warming: 1.5 °C, 2 °C, and 3 °C above preindustrial levels. Damage estimates reflect the 2015 price level; differences between countries in terms of repair costs have been accounted for.

Current risk to railway networks is projected to increase by 255% under a 1.5 °C, by 281% under a 2 °C, and by 310% under a 3 °C warming scenario. Largest risk increases are projected for Slovakia, Austria, Slovenia, and Belgium. Compared with the 3 °C scenario, limiting global warming to the 1.5 °C and 2 °C targets of the Paris Agreement would result in annually avoided losses of €317 million and €164 million, respectively.

To cover this risk increase due to climate change, European member states would need to increase expenditure in transport by €1.22 billion annually under a 3 °C warming scenario without further adaptation.

There are some relevant limitations to this assessment. Only flooding from rivers and streams was considered; flooding was assumed to occur when precipitation leads to discharge conditions that exceed the current protection standards of these rivers and streams. In these projections, the present railway infrastructure assets were kept constant, and only damage to railway tracks was included; damage to railway stations, control centers, or bridges was excluded from the analysis. Also, indirect losses caused by disruptions of train traffic were not included.