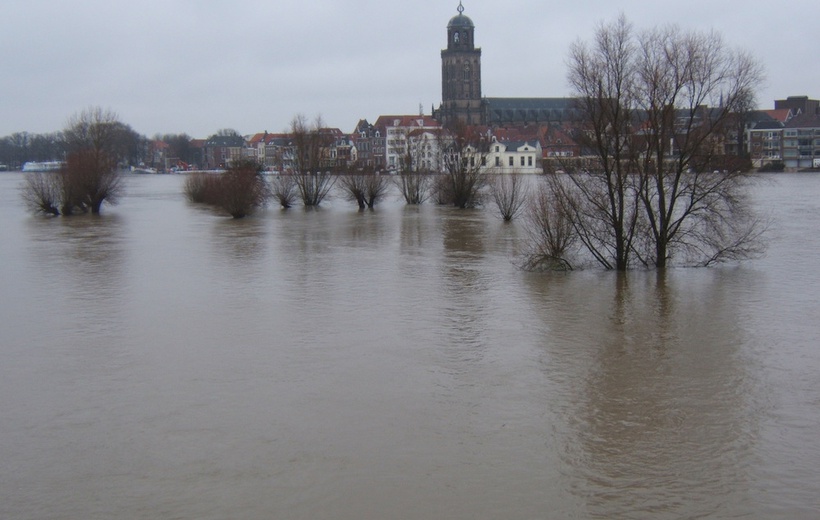 When rivers flood, nearby rivers often flood at the same time. The distance over which multiple rivers flood near synchronously far exceeds the size of individual drainage basins. This was shown from an analysis of annual flood data from several thousand European rivers over the period 1960-2010.

This synchrony of rivers flooding at the same time is a largely overlooked dimension of flood behaviour. Flood risks are typically assessed and managed at the scale of individual basins. Risk finance, flood forecasting, and interpretations of flood trends can be improved by accounting for how flood risks extend beyond the borders of individual drainage basins.

The researchers defined a new concept to characterize the spatial extent of floods: the flood synchrony scale. This scale is defined as the maximum radius around an individual river gauge within which at least half of the other river gauges also record flooding almost simultaneously. ‘Almost simultaneously’ refers to a time interval of 7 days to capture responses to single forcing events (e.g., a rainstorm), allowing for somewhat lagged responses of rivers to the same weather systems. Data were taken from the European Flood Database, consisting of dates of annual maximum stream flows or water levels in European river catchments for each calendar year from 1960 to 2010.

The average flood synchrony scale for European floods represents a surface area of almost 70,000 km2, which is over an order of magnitude larger than the typical size of drainage basins in the database.

No simple correlation with precipitation

One might expect this synchrony scale to correlate with annual maximum daily precipitation. This appears not to be the case, however. Many annual floods do not result from maximum annual precipitation but instead (for example) from snowmelt or subextreme precipitation during times of high soil moisture. Also, topography appears to substantially influence the flood synchrony scale: flooding tends to be more spatially coherent at lower altitudes and in flatter landscapes.

No explanation is given for this trend over the last decades. Other studies have shown that the characteristics of river floods are changing under climate change. Possibly this affects flood synchrony as well.