Strong impact of warming permafrost on Russia’s buildings and infrastructure 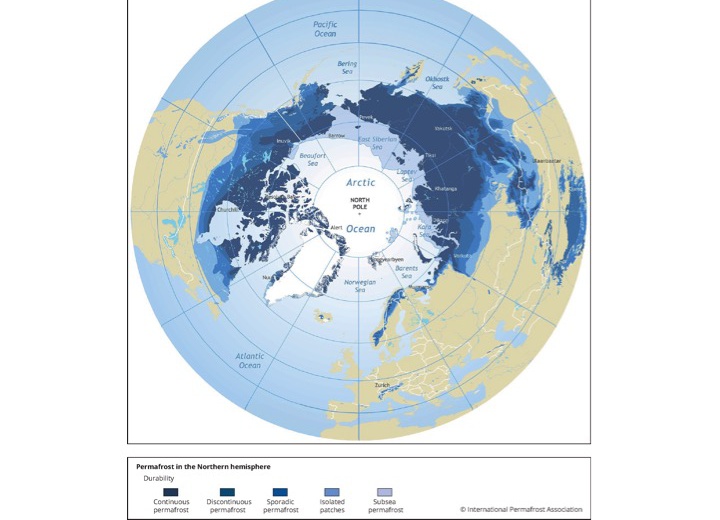 Infrastructure and housing in Russian permafrost regions are affected by climate change. Permafrost degradation under global warming reduces the capacity of frozen ground to carry loads imposed by structures. Moreover, the thawing of ice-rich sediments can result in ground subsidence and uneven surface deformations, which can further undermine the stability of engineered structures.

Simply defined, permafrost is ground which remains at temperatures below 0°C for at least two consecutive years. Permafrost is considered ‘continuous’ when more than 90% of an area is underlain by permafrost; permafrost is defined as ‘discontinuous’ or ‘sporadic’ when percentages are lower. Permafrost occupies nearly 65% of the territory of the Russian Federation. Permafrost is a very common phenomenon east of the Ural Mountains; the extent in the European part of Russia is limited.

The importance of permafrost regions for Russia’s economy

Permafrost regions are important for Russia’s economy because of the extraction of several resources. For instance, within Russia, more than 15% of oil and 80% of gas production was concentrated in the Arctic regions in 2016.

It is a major logistical challenge to connect these resource-rich but distant areas with the industrial and financial centers in the European parts of Russia. Over the last hundred years, complex transportation networks consisting of pipelines, airports, permanent and seasonal roads, local and federal railroads, and river and oceanic ports have been developed to allow the flow of goods, services, and people between these isolated production centers and consumers in European Russia and abroad. The majority of these networks is located in or traverses through permafrost zones.

Northern Russia is warming at a rate 2.5 times faster than the global average. Permafrost temperature has increased by up to 2°C over the last 30-40 years, and at some sites by as much as 1°C over the last decade.

These rapidly changing climatic conditions were usually not fully considered in past engineering practices. Several studies have attributed the increase in reported infrastructure damage in the northern regions of Russia to climate-induced permafrost changes. More recent assessments have attributed a 5 to 20% decrease in bearing capacity of permafrost foundations in a number of Russian cities to observed climatic changes.

Two major risks to buildings and infrastructure are associated with permafrost degradation: ground subsidence and bearing capacity. Ground subsidence is associated with the melting of spatially heterogeneous ground ice, accompanied by the consolidation of sediments under progressive thickening of the active layer. This process can be a major hazard for critical infrastructure (roads, railroads) and, as a result, can negatively impact the connectivity and accessibility of northern communities by land. The bearing capacity of foundations on permafrost is dependent on permafrost characteristics. Permafrost warming can reduce the ability of foundations to support buildings and structures, leading to deformations and ultimately structural failure.

The cost of permafrost degradation by mid-century

The widespread impacts of climate-induced permafrost changes are expected to have a pronounced negative effect on infrastructure throughout the Russian permafrost region by 2050. The Russian economy strongly depends on the extraction and transportation of mineral resources from the northern and eastern parts of the country affected by the presence of permafrost. Permafrost regions have less than 4% of total Russian population, but account for almost 17% of total Russian cost of fixed assets. These estimates highlight the importance of permafrost for the Russian economy.

Ongoing and projected changes in climate conditions, which were not anticipated during construction, could be a significant risk to infrastructure built on permafrost, and could result in increased regional and federal economic burdens.

According to this assessment, the total value of fixed assets that are directly affected by permafrost degradation is almost 250 billion USD, which is roughly 7.5% of Russian GDP for the year 2016. By mid-century, 20% of commercial and industrial structures and 19% of critical infrastructure with a total cost of 84.4 billion USD will be negatively affected. Also, 54% of residential real estate on permafrost, representing 20.7 billion USD, will be affected.

Such a high percentage of vulnerable infrastructures can negatively impact the economy of the Russian permafrost regions. The financial burden associated with the mitigation of negative impacts related to permafrost degradation varies from less than 0.1% to >3% of a region’s Gross Regional Product.

While the permafrost infrastructure in North America and Scandinavia consists primarily of relatively small residential buildings and lightweight industrial facilities, the Russian Arctic is dominated by massive, heavyweight, apartment buildings and structures. It might, therefore, be more costly for Russia to address negative impacts of permafrost changes. One option is the reuse of existing foundations on permafrost to support lighter buildings and structures engineered in accordance with the rapidly changing ground conditions.