Will drought events become more frequent and severe in Europe? 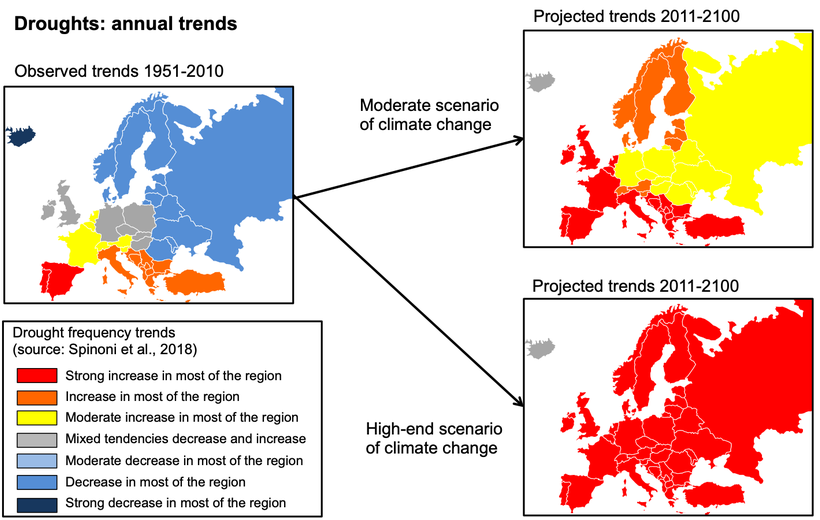 This is the title of a study recently published in the International Journal of Climatology where the authors present a picture of drought trends in Europe until the end of the 21st century. The study is based on a combination of indicators that characterize drought trends through changes in precipitation and evapotranspiration (and thus high temperatures). The indicators are calculated from the results of high-resolution climate projections, based on both a moderate and high-end scenario of climate change. The answer is an unequivocal yes!

Observed trends since the 1950s

From the 1950s to the 2010s, southern Europe experienced increasing drought frequency and severity with the Mediterranean region as a hotspot, especially in spring and summer. A clear increase of droughts was also evident in the Carpathian region. Northern Europe, on the contrary, showed a tendency towards wetter conditions, whilst central and eastern Europe are a transition zone.

Under the moderate scenario of global warming, the increasing drought trend is projected to continue and grow stronger until the end of the 21st century over southern and western Europe, while northern Europe is projected to revert the past trend to see more frequent and severe droughts. Central Europe, eastern Europe, and southern Scandinavia show only a moderate increase, and Iceland is characterized by a moderate decrease in drought frequency. Only over the Mediterranean area drought events will become significantly more severe.

Under the high-end scenario of global warming, drought frequency is projected to increase over the whole of Europe, with a few exceptions: moderate increase over Switzerland, Hungary, Poland, Belarus, Lithuania, and central Scandinavia, and mixed tendencies over Iceland. The largest increases are projected over southern Europe where droughts and extreme droughts could be up to 50% more frequent, as well as over France and the British Islands (up to +40%), but also over central Europe and Russia (up to +35%).

Droughts will become much more severe over the southern third of Europe and over northernmost Scandinavia. Excluding central Iceland and southern Norway, the entire European continent will be affected by more frequent and severe droughts as the century passes.

According to the authors, their findings reinforce the view of the Mediterranean area as a drought hotspot for the entire 21st century: southern Europe shows both the largest drought frequency values over the recent past and the largest increase in future periods. The Mediterranean region also stands out as the area with Europe’s largest increase of total drought severity as the 21st century progresses, both under the moderate and high-end scenario.

Other possible hotspots for drought hazard and risk in future decades are northern and northeastern Scandinavia, southern England, and western Europe. Like the Mediterranean region, these regions are also projected to face the largest increase of drought frequency and severity under both scenarios of climate change.

We have translated the results of this study to maps of Europe. The Figure above shows the results on an annual basis. The maps for all four seasons can be found here.