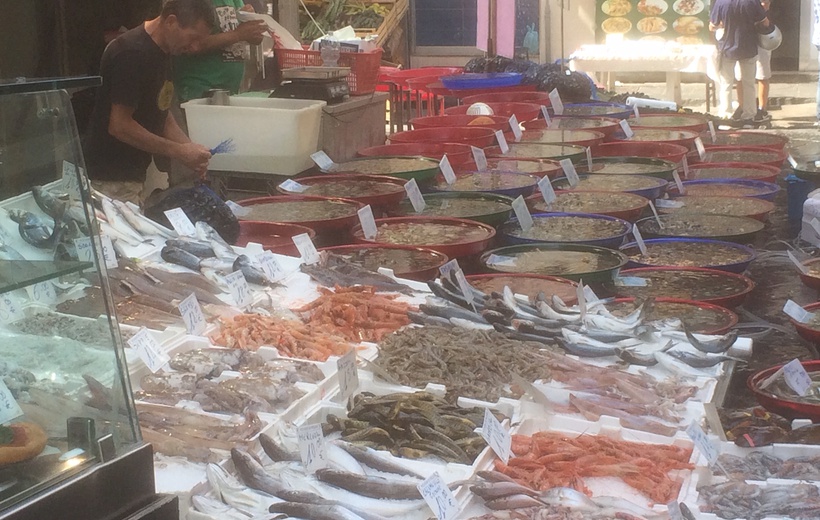 Climate change affects both agriculture and marine fisheries. Crop yields are affected by higher temperatures, changes in rainfall, water demand, and CO2 effects on photosynthesis and transpiration. Fisheries production is affected by shifts in species’ distribution as a response to oceans warming up, and by changes in primary production. Food security of a large part of the world population depends on both food sectors. What if climate change negatively affects both sectors at the same time?

The vulnerability of societies to the simultaneous impacts of climate change on agriculture and marine fisheries was analysed at a global scale. Changes in productivity of these food sectors were projected to the end of the century relative to the current situation. Two scenarios of climate change were used for this: a high-end and a low-end scenario. For agriculture, changes of crop yields of maize, rice, soy, and wheat were evaluated. These projected impacts of climate change were combined with data on countries’ dependency on each of these sectors for food, economy, and employment. Also the capacity of countries to respond (adapt) to climate impacts was evaluated.

In countries that depend on both food sectors, four situations may unfold: both sectors are favoured by climate change ('win-win'), both sectors are negatively affected ('lose-lose'), losses occur in one sector and gains in the other, and there are no impacts at all.

A ‘perfect storm’ in the tropics

For tropical areas, particularly in Latin America, Central and Southern Africa, and Southeast Asia, a ‘perfect storm’ is projected. These areas are generally highly dependent on agriculture and fisheries for employment, food security, or revenue, and for these areas exposure to lower agriculture productivity and lower maximum fisheries catch potential is projected by 2100. Besides, most developing countries in these areas lack the capacity to respond to and recover from climate change impacts.

In Europe and North America, the situation is completely different. At these higher latitudes, food, jobs, and revenue depend less on agriculture and seafood production, while the losses these regions will experience are much less than those in the tropics. In fact, food security will even improve in some cases, such as Canada and Russia.

Hence, although negative consequences of climate change cannot be fully avoided in some regions of the world such as Africa, Asia, and Oceania, they have the potential to be drastically lowered if mitigation actions are taken rapidly.

In this analysis, other food sectors were disregarded, including aquaculture, freshwater fisheries, and livestock production. In the scientific literature, also for these food sectors negative impacts of climate change are projected.

Some vulnerable countries have a notable freshwater fishery sector. There seems to be little potential to increase inland fisheries productivity because of increased competition for waters and the current high proportion (90%) of inland catch coming from already stressed systems.

The global potential of marine aquaculture production that does not rely on inputs from wild-capture feeds (i.e., shellfish) is expected to decline under climate change, although regions such as Southeast Asia may become more suitable in the future.

For the livestock sector, decline in pasture productivity in many regions with notable broad-care grazing industry, such as Australia and South America, combined with additional stresses (stock heat and water stress, pests, rainfall events) is likely to outweigh potential benefits. Besides, the intensive livestock industries may be affected by disruption of major feed crops and marine fish stocks used for fishmeal.