New perspectives on the global distribution of climate risk. The Netherlands stands out! 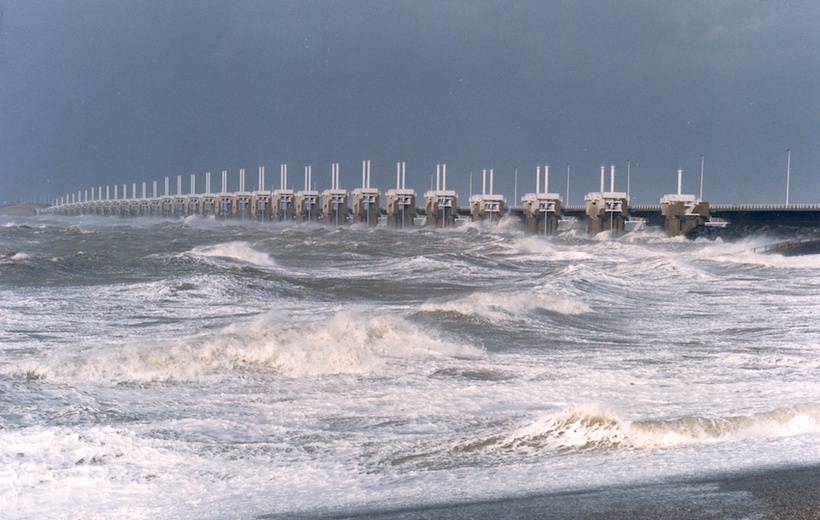 The Dutch are very well aware of the possible impacts of climate change to their low-lying country. This storm-surge barrier in the Southwest is one example of their high level of flood protection. And they continue to invest in adaptation. But are they aware that transnational climate change impacts may still make them very vulnerable, despite the measures they have taken within their own borders? (photo: Jan van den Broeke, www.beeldbank.rws.nl, Rijkswaterstaat).

The exposure to transnational climate impacts has been quantified and presented as a global index called the ‘Transnational Climate Impacts Index’. This index is made up of contributing indicators that cover four transnational risk pathways through which climate risk may propagate: biophysical systems, movement of people, financial flows and international trade.

In a global perspective, the vulnerability of European countries to the direct impacts of climate change within their borders is low. However, the transnational climate impacts of some European countries is among the highest worldwide. These countries include mainly the Benelux countries, but also Germany, Switzerland and the Baltic States, as well as Montenegro, Malta and Portugal. In the top ranking of most vulnerable countries, The Netherlands stands out. Only eight countries are more vulnerable than The Netherlands, and all of them are in Sub-Saharan-Africa and the Middle East. The high position of The Netherlands seems to be related to its global openness as a trading nation that also makes the country highly exposed to transnational climate impacts.

Adaptation as a global collective endeavour

According to the authors of this study, their results should be used primarily to raise awareness and start discussions about the relevance of transnational climate impacts. Due to their global interconnected nature and the complexity described above, these impacts imply a need for enhanced international cooperation on adaptation. This places climate change adaptation in a new light, where adaptation is seen more as a global collective endeavour, rather than a purely local one, which tends to dominate current assessments of climate impacts. This also suggests that countries with a high score on transnational climate impacts’ might choose to engage in adaptation in countries upon which they depend heavily, or to undertake measures to stabilise volatile markets.

Further reading: The ClimateChangePost has interviewed the authors of this study in 2017. This interviewed has been published in June 2017: ‘Cross-border impacts of climate change: a blind spot for the European Union’.