Cross-border impacts of climate change: a blind spot for the European Union 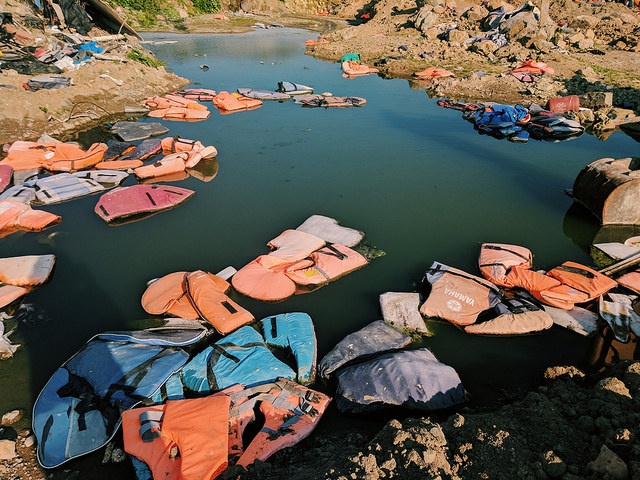 Lifejackets on a Greek beach bear witness to the refugee influx that shook the foundations of the European Union. One of the future cross-border impacts of climate change may be the migration of even larger numbers of refugees (photo: Megan Trace, www.flickr.com).

The Third European Climate Change Adaptation Conference was held in Glasgow in June 2017, focused on “Our Climate Ready Future”. The ClimateChangePost presents a selection of contributions to this conference. This article is the second in a series of eight based on presentations given at the conference, and interviews with the scientists.

This contribution was presented by Richard Taylor of the Stockholm Environment Institute.

‘The European Union may be one of the most at-risk regions in the world with respect to cross-border climate change’. A remarkable statement made by Richard Taylor and his colleagues at the Stockholm Environment Institute at the European Climate Change Adaptation Conference (ECCA) in Glasgow in June 2017. Climate risk assessments generally focus on direct impacts of climate change; cross-border impacts are left out. ‘The latter, however, may be as significant or more significant than direct impact ones’, Richard stated. ‘Especially the small EU states are highly vulnerable, such as the Netherlands, Belgium, and Luxembourg’.

A clear example is the impact of the recent ‘refugee crisis’ caused by destabilisation and conflict in Europe’s neighbourhood, that shook the foundations of the EU project. The European Union is highly dependent on other parts of the world for its stability and prosperity. The EU is the biggest trade actor in the world, for instance, accounting for 16% of global imports and exports. It therefore seems obvious that climate change impacts beyond Europe’s borders are likely to create risks, and require adaptation ‘at home’. But so far, the external dimension of climate risks has been largely ignored by adaptation planning at both the national and EU levels. In addition, there may also be spill-over effects of climate change within the EU from one member state into others.

Adaptation planning should consider cross-border impacts. Three dimensions must be addressed: spill-over effects between EU member states, vulnerabilities outside the EU that may impact the EU, and vulnerabilities in the EU that may impact the rest of the world. According to Henrik and Richard, climate change-related risks can affect countries through four pathways: biophysical (transboundary dependency on water), finance (foreign investments), people (migration), and trade. ‘The trade pathway particularly explains why countries like the Netherlands and Belgium are highly vulnerable. These countries are characterized by their openness of trade. Through trade they have a high exposure to climate change impacts in the rest of the world’, they explain.

These dimensions and pathways can be combined in indicators that express each country’s exposure to climate change. This research, carried out by the Stockholm Environment Institute, compares exposure to direct impacts in each country, and exposure when indirect, cross-border impacts are also included. The results reveal a striking disparity between the two scenarios - especially for wealthy countries in Northern Europe. These countries can afford to implement strategies to adapt to climate change; their vulnerability to direct impacts, therefore, is relatively low. Their wealth, however, is related to their open economies and investments overseas, which puts them at risk, indirectly, to climate change impacts in other parts of the world. Richard: ‘You might say that Asia’s climate change vulnerabilities, for instance, may be Europe’s problem as well. For example, the flooding which occurred in Thailand in 2011 was a national disaster, but it also triggered impacts in other places including the shortage of hard disk drives in Europe’.

Henrik and Richard stress that their results are preliminary. ‘Do not trust our current results too much. We need better data’. One thing is clear, however: the EU needs to consider cross-border impacts of climate change before claiming a country’s vulnerability is ‘low’.