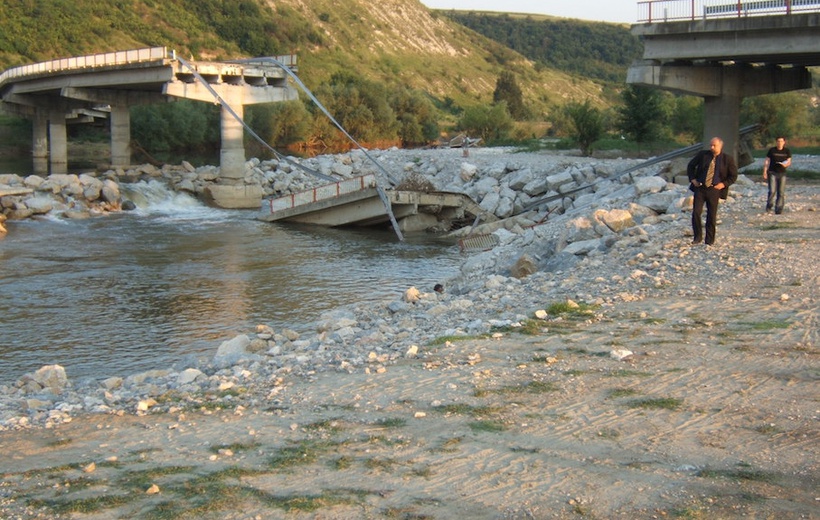 Infrastructures are ‘critical infrastructures’ when they are vital to ensure health, wealth, and security. They include existing transport systems, energy generation plants, industry, water supply networks, and education and health infrastructures. The impacts of climate change may damage these infrastructures. For the European Union plus Switzerland, Norway, and Iceland (EU+), this was assessed for the seven most harmful climate-related extremes: heat and cold waves, droughts, wildfires, river and coastal floods, and windstorms. The analysis is carried out for 2011 – 2040 (the 2020s), 2041 – 2070 (the 2050s), and 2071 – 2100 (the 2080s) under a moderate scenario of climate change; 1981 - 2010 is used as the reference period.

According to this assessment damages to ‘critical infrastructures’ in the EU+ could triple by the 2020s, multiply six-fold by mid-century, and amount to more than 10 times present damage of €3.4 billion per year by the end of the century due only to climate change. Damage from heat waves, droughts in southern Europe, and coastal floods shows the most dramatic rise, but the risks of inland flooding, windstorms, and forest fires will also increase in Europe, with varying degrees of change across regions. Economic losses are highest for the industry, transport, and energy sectors. Southern and south-eastern European countries will be most affected and, as a result, will probably require higher costs of adaptation.

The strongest rise in multi-hazard damage is projected for the energy sector. Current (expected annual) damage of €0.5 billion per year could be 400%, 860% and 1600% higher by the 2020s, 2050s, and 2080s, respectively. This rise results from the sectors sensitivity to droughts and heat waves (e.g. decrease in cooling system efficiency of power plants due to higher water/air temperature).

A comparable trend can be observed for the transport sector: an increase of current damage of €0.8 billion per year with 1500% by the end of this century. For the transport sector, heat waves will largely dominate future damage (92% of total hazard damage by 2080s), mainly by affecting roads and railways (e.g. buckling of rails, melting of asphalt). Inland waterway transport will increasingly be affected by droughts (e.g. less navigation capacity due to low water levels in rivers). Sea level rise and increased storm surges will lead to strong increases in damage to ports in the coming century.

For industry, which faces the greatest damage among the sectors considered, current damage of €1.5 billion per year is estimated to increase 10-fold. Floods and windstorms currently dominate hazard losses in the industry sector, mainly through structural damage to infrastructures, machinery, and equipment. Although flood and windstorm damage is on the rise, those of droughts and heat waves will quickly outweigh its contribution in the coming decades. The impacts relate mostly to the degradation of water quality and a reduction of the decomposition rate of water and waste management systems, with corresponding higher costs for water and its treatment.

The impacts of most-destructive hazards

Whereas current multi-sector hazard damage relates mostly to river floods (44%) and windstorms (27%), the proportions of drought and heat waves will rise strongly, to account for nearly 90% of climate hazard damage by the end of the century (compared with 12% in 1981 - 2010). The relative contributions of wildfires and coastal floods to the overall projected damage are low, despite the strong increase in coastal flood damage that is projected for the coming century. Reported cold-related damage in Europe is marginal and could completely disappear with global warming.

The increase in damage load will be strongest in southern Europe, with the most southerly regions progressively more prominently affected by future climate extremes than the rest of Europe. A large part of the north-south damage gradient across Europe relates to droughts, which will strongly intensify in southern parts of Europe and become less severe in northern regions. For the energy and industry sector, being especially sensitive to this hazard, damage will strongly increase in the south and decrease in the north of Europe.

River and coastal floods will remain the most critical hazard in many floodplains and coastal stretches of western, central, and eastern Europe, including the British Isles, Poland, the Czech Republic, Bulgaria, Romania, and northern coastlines of the Iberian Peninsula.

Investments to make these critical infrastructures resilient to the changing climate up to 2040 are estimated to equal €25 billion. For climate change in the medium term (up to 2070) the estimated investments for adaptation equal €87 billion, and for the end of the century over €200 billion. In addition, maintenance costs will rise as well. Adaptation costs will not fall equally across Europe.