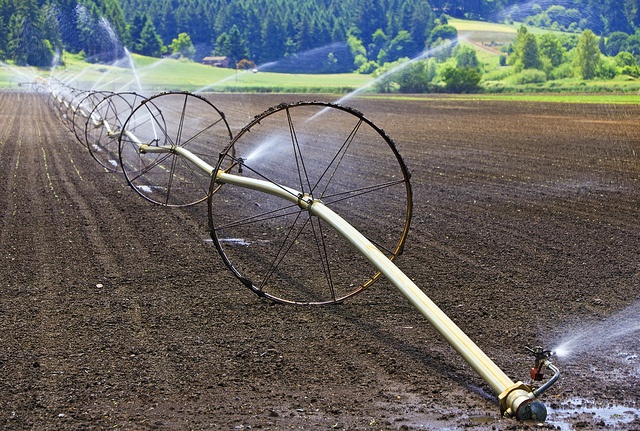 Global water consumption for irrigation can sustainably increase by 48%, according to a recent global assessment (photo: Ian Sane, www.flickr.com)

Closing the gap between actual and maximum crop yield

Global crop production depends on water received both as precipitation (or ‘green water’) and irrigation (or ‘blue water’) from surface water bodies and aquifers. The actual yield that a farmer currently achieves is often less than the potential yield he could achieve under optimal circumstances for a crop cultivar, that is, a situation with non-limiting water and nutrient supplies, and with pests, weeds, and diseases effectively controlled. The difference between this potential yield and the actual yield is called the crop yield gap. Additional irrigation will be needed in many places in order to close the yield gap and to maximize food production.

Closing this gap with sustainable water use

For the world’s existing croplands, the irrigation water demand under current and maximized crop production has been quantified. This was done for 16 major crops that account for 73% of the planet’s cultivated areas and 70% of global crop production. These numbers were compared to local renewable freshwater availability, accounting for the volumes of water that are needed to sustain aquatic habitats, the so-called ‘environmental flows’. Thus, world regions could be identified where irrigation can be expanded into currently rainfed croplands without threatening freshwater ecosystems. The results are hopeful.

An additional 2.8 billion people can be fed sustainably

Global water consumption for irrigation could sustainably increase by 48%, the results show. Thus, 37% more calories could be produced, enough to feed an additional 2.8 billion people. If current unsustainable blue water consumption practices were eliminated, a sustainable irrigation expansion and intensification would still enable a 24% increase in calorie production. Collectively, these results show that the sustainable expansion and intensification of irrigation in selected croplands could contribute substantially to achieving food security and environmental goals in tandem in the coming decades.

The results are hopeful for many regions where food security is under pressure. Sustainable irrigation could increase national food self-sufficiency in many countries that today meet large fractions of their domestic food demand through international trade. According to this study, China has the greatest potential to sustainably increase crop production by intensifying and expanding irrigation, thereby feeding an additional 382 million people. Africa currently produces enough calories to feed 400 million people, making it the continent with the largest gap between crop production and demand. An increase in yields through investments in irrigation expansion could sustainably feed an additional 450 million people and substantially reduce the continent’s dependence on food imports.

What needs to be done

Adequate and informed investments in irrigation infrastructure can help to feed billions more people, avoid agricultural expansion into natural habitats, and safeguard local boundaries of freshwater allocation for human and natural systems. More needs to be done than just installing more irrigation infrastructure, however. In addition, nutrient (fertilizer) supply needs to be improved, crop switching or increased cropping frequencies may be needed, and rainwater should be stored for its use during the dry seasons.