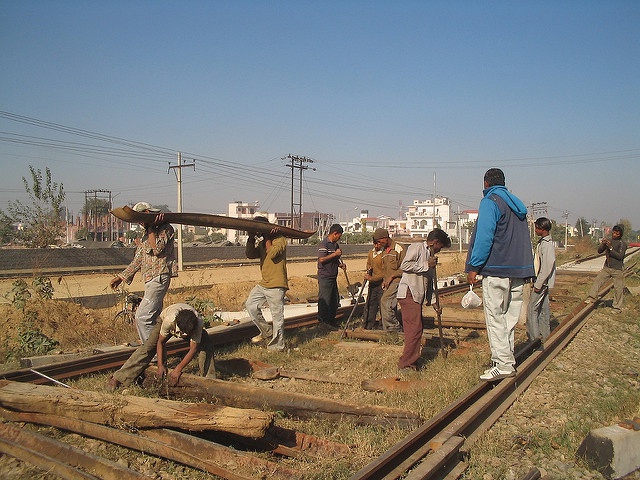 In particular for regions such as India, heat-related illness and the economic cost of avoiding it is a serious issue (photo: Gopal Aggarwal, www.flickr.com)

The exposure of workers to hot environments is expected to increase as a result of climate change. Physical activities in hot environments can elevate the risk of heat-related illness, such as heat exhaustion and heat stroke, some of which may be fatal. In particular, outdoor workers are vulnerable to hot environments, and thus effective preventive measures are necessary in the workplace. In order to prevent heat-related illness, it is recommended that workers take breaks during working hours. However, this would lead to reductions in work time and labour productivity. The global future economic cost of heat-related illness prevention through more breaks has been estimated under a wide range of climatic and socioeconomic conditions.

Under a high-end scenario of climate change, the loss of work time and labour productivity may result in a loss of 2.6 to 4.0% of Gross Domestic Product (GDP) in 2100 compared to current climate conditions. The estimated cost in a low-end scenario is substantially lower: 0.46% - 0.49% in 2100. Estimated GDP losses will be less than 0.5% if the 2.0 °C goal of the Paris Agreement is achieved.

It pays of to achieve the Paris Agreement target

According to the authors of this study, these numbers may be a strong incentive for achieving the mitigation target of the Paris Agreement, in particular for regions such as India and South-East Asia where the risk of heat-related illness seems to increase strongly. The cost of mitigation corresponding to the low-end scenario of climate change, measured by GDP loss, is estimated to be approximately 5% in 2100. The estimated extra economic cost of work time and labour productivity loss under a high-end scenario of climate change compared with this low-end scenario is about 2.1 to 3.5% of GDP. Thus, according to these estimates, approximately 40% - 70% of the mitigation cost may be recovered by only the cost benefit derived from avoiding the high loss of work time and labour productivity under a high-end scenario of climate change.

Of course, these results should be interpreted with care. There are several limitations to this study, due to assumptions with respect to air-conditioning device availability, for instance, or technological or social innovations in the future. After all, who knows what the future of outdoor workers in 2100 looks like? The results are a worst-case-scenario analysis. Still, this study illustrates that on a global scale, and in particular for certain regions such as India and South-East Asia, heat-related illness and the economic cost of avoiding it is a serious issue that should be kept in mind when discussing the benefits and economic cost of climate change mitigation.