The ice regime of the rivers of European Russia changes, flood risk of ice dams too 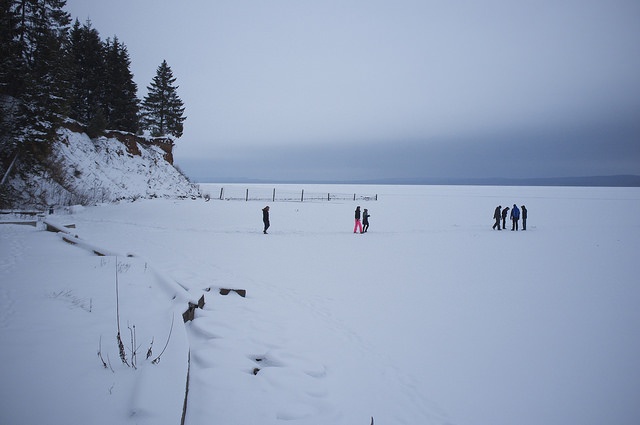 In the long term, climate change leads to a significant reduction of the risk of ice jamming in spring (photo: Aleksandr Zykov, www.flickr.com)

In lowland rivers of European Russia ice jams (and dams) can lead to floods. Congestion of ice or sludge in channels results in a sharp rise in water level, and often leads to flooding. On large Russian rivers flowing from south to north (the Northern Dvina, the Pechora, the Ob, the Yenisei, the Lena and others), ice jam stages during spring ice run are often higher than the maximum water levels during flooding).

Information on the ice regime of the rivers of European Russia was summarized from observations at 300 hydrological stations in the period from 1936 to 2013. This information includes the appearance of ice, freeze-up, breakup, beginning of the spring ice run and ice clearance, the duration of ice cover, autumn sludge run and spring ice run, typical water levels during spring ice run and ice jam formation, and the frequency of ice jams.

The danger of ice on Russian rivers

Ice jam floods are particularly dangerous because they are accompanied by an ejection of ice on the shore that breaks structures (dam slopes, levees, bridge pillars) located within the flood zone. The damage caused by ice jams typically far exceeds the damage caused by floods in the ice-free period. In addition to flooding and damaged hydraulic structures, prolonged ice jam delays the cleaning of the river of ice, reducing the navigation period. Rises of water level below hydroelectric dams caused by ice and sludge jams result in a reduction of power production.

The distribution of ice jams along the river not only depends on temperature. It also depends on water discharge during breakup. Along with higher temperatures the water regime of rivers changes: in winter and autumn precipitation more often falls as rain instead of snow. Loss of snow accumulation in winter results in an earlier start of spring floods, a reduction of spring flood discharge and flood levels, and less power to move the ice. Powerful flood waves push the ice over a greater distance, and ice jams are formed further downstream than in years with low water discharge.

Most of the rivers in European Russia freeze for 4 months or more each year. Over the last decades (since the period of 1961-1990) ice regime changes due to climate change and other impacts have been quite small: the dates of breakups on the rivers in the north of European Russia have shifted earlier by no more than 5 days, and changes in the maximum thickness of ice do not exceed 10 cm.

However, climate change now causes simultaneous breakups in quite extensive sections of the rivers. This enhances the ice jam danger. In addition, low water during spring breakup contributes to stable multi-day ice jams. Total ice run duration on the Volga, for instances, has increased sharply and now can reach 40 days, instead of the average of 5 days in previous decades. The absence of steady freeze-up, and the occurrence of prolonged thaws that split the period with ice phenomena into two or more separate parts are the most significant changes in the ice regime of rivers within European Russia.

Less predictable in the short term, lower risk in the long term

The ice regime changes in a complicated way. On the one hand, higher temperatures affect the period of freezing, the process of thawing and the formation of ice dams. On the other, the water regime of rivers changes: winter and autumn precipitation more often falls as rain instead of snow, leading to less snow accumulation in the winter and lower river discharge in spring. The latter means flood waves have less power to push the ice over a greater distance. Due to this combination of effects the hazard of ice jamming is less predictable in the short term. In the long term, however, climate change leads to a significant reduction of the duration of the ice regime periods, and a lower risk of ice jamming.