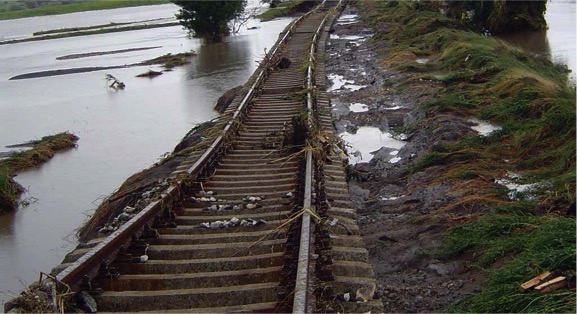 Erosion of the bank of a railway track by heavy precipitation (photo: Wilfried ten Brinke)

Heavy precipitation events may threaten Europe’s infrastructure, especially streets and railway lines, and the electricity and telecommunication networks. In addition to direct local effects such as short circuits and submergence, heavy precipitation can cause secondary hazards such as river floods, snow avalanches and landslides. Global warming will probably lead to an increase in extreme precipitation because a warmer atmosphere can absorb more moisture. When sufficient moisture is available, precipitation extremes are expected to increase by 6-7 % per degree K.

Future changes in frequency, size, duration, and severity of heavy precipitation events in different parts of Europe were estimated from simulations with a large number of climate models for an intermediate and high-end scenario of climate change. The study focused on rain events with a current 10-year return period of occurrence: from interviews with infrastructure providers, emergency rescue services, and private weather services it was concluded that the 10-year return period of rain events is a good threshold for the detection of relevant events. Changes were studied for future time-slices 2021 - 2050 and 2071 - 2100 compared with 1971 - 2000 as a reference.

The results also suggest that the areas affected by heavy precipitation events may become larger in many European regions, especially for sub-daily events. This can have consequences for infrastructure networks. Larger-scale events may damage more infrastructure elements at the same time, and more personnel may be needed for repairs and emergency services. In addition, larger events are more likely to cause river flooding.

The results of this study do not clearly indicate whether on average heavy precipitation events become stronger. The strongest precipitations events were detected in the future time slices, however, suggesting that infrastructure providers may have to cope with unprecedented events in the future.

The climate change simulations do not show changes in event duration.

Currently, the frequency of heavy precipitation events is highest over (parts of) Iceland, western Norway, the Alps, north-western Spain and the Mediterranean coast, for both sub-daily, daily, and multi-day events. Except for the Mediterranean coast these are also the regions where the projected increase of heavy precipitation events is highest: the westward-facing sides of the European coasts (western Scandinavia, western Ireland, western Scotland, Iceland, the western Balkans). Under a high-end scenario of climate change, for these regions daily and multi-day heavy precipitation events with a 10-year return period may become twice as likely, and sub-daily events even three times as likely by the end of this century, for all seasons.

The simulated changes for 2100 for a moderate scenario of climate change are 60 % (daily and multi-day events) to 75 % (sub-daily events) of the changes projected under the high-end scenario.