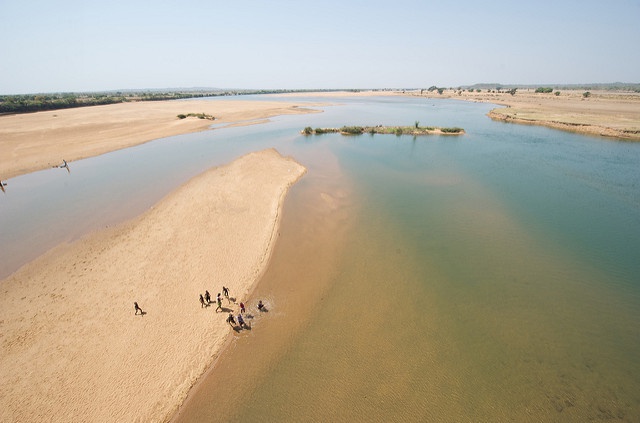 River discharge volumes generally vary throughout the year following a seasonal pattern. This pattern characterizes a certain river. Timing and magnitude of high-flow and low-flow periods result from local seasonal cycles of precipitation, evaporation demand, and snow accumulation and melt, and are characteristic for a certain region and thus a certain river basin. Climate change may alter the seasonal stream flow regime in many regions through a variety of (potentially interfering) mechanisms including shifts in the temporal and spatial precipitation pattern, changes in snowmelt timing due to rising temperature, or increasing evaporation demand.

For eleven large river basins climate change impacts on stream flow seasonality have been assessed between the present-day situation and the end of the century. These basins include Rhine and Tagus in Europe, upper Amazon in South America, upper Mississippi in North America, Lena, Ganges, upper Yellow, and upper Yangtze in Asia, Blue Nile and Niger in Africa, and Darling in Australia. This was done for low- and high-end scenarios of climate change. Only shifts of at least one month could be inferred; seasonality shifts at sub-monthly time scales could not be identified within the chosen study design.

The findings of this study indicate that stream flow seasonality hardly changes between now and the end of the century for most of the studied river basins. The timing of high-flow and low-flow periods more or less stays the same. The Lena and Niger are an exception. The Lena, an arctic river, strongly reacts to spring-summer snow melting; projected increases in air temperatures in the northern latitudes lead to advancing of the snowmelt season and an earlier beginning of the flood season of the northern rivers. In the Niger basin stream flow seasonality is projected to shift due to a later start of the wet season over the semi-arid African Sahel as a result of decreasing precipitation amounts in July and August.

The authors stress that uncertainties in these model projections are high for all studied basins due to uncertainties in climate models, hydrological models, and scenarios of climate change. Besides, the study only focused on climate change impacts on the natural stream flow regime. In many regions of the world, the natural flow regime is already significantly altered by human activity through e.g. flow regulation, water abstraction and transfer, and land-use change. Projected population growth and economic development are expected to increase the demand for land and water resources, and will probably further intensify human interference on the stream flow regime. According to the authors of this study, these direct anthropogenic impacts may exceed the projected climate-induced alterations.