Climate change, water and security in the Middle East 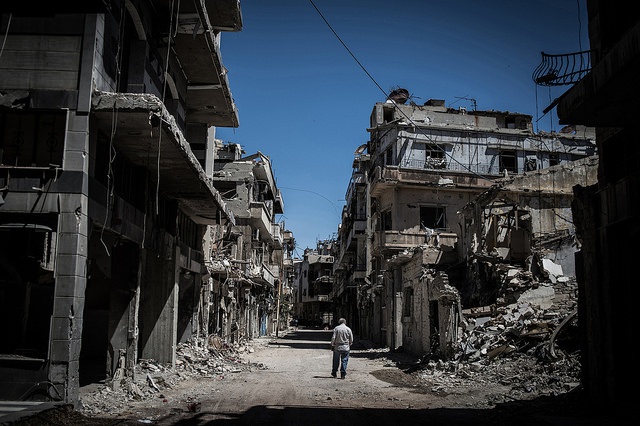 Several social factors and causal mechanisms play a role in turning climate-induced stress into violent conflicts. The interactions between physical, geopolitical and intra-state factors need to be considered. This was done in a recent study that focused on the Middle East. According to the authors, ‘it is only by taking this broader perspective that we can assess why, where and when climate change may lead to conflict.’

The physical setting of climate change

An increase in the severity and frequency of droughts in arid and semi-arid regions is one of the potential variables through which climate change may lead to conflict. In such regions, droughts may amplify stress on water sources and reduce agricultural productivity. A prominent example is the Middle East region. Especially for the Jordan River basin water-induced conflicts have often been considered most likely.

The geopolitical and internal setting of conflicts

The geopolitical setting refers to a country’s neighbours, and the water relations between them. Countries that share the same river depend upon water management in countries upstream and influence discharge and water quality downstream. The relationships between countries and the nature of neighbouring political regimes constitute critical variables affecting the readiness to cooperate over water and assist or desist in case of crisis.

One of the most critical variables of the internal setting of a country is its adaptive capacity: the ability to adjust to change and recuperate from its effects. Higher adaptive capacity reduces vulnerability and lessens the likelihood of climate-induced conflicts. Adaptive capacity is related to technological means in a certain society, and the economic structure and the institutional structures and capacities.

For two Middle East river basins the link between climate change and conflicts has been assessed thoroughly: the Euphrates and the lower Jordan River. This was done for the extreme drought that afflicted the Middle East between 2007 and 2010, which was the culmination of a 15-year dry period, and whose occurrence and severity are argued to be an outcome of climate change.

These two basins were compared because the same extreme drought led to completely different impacts. Despite the relatively high water availability in the Euphrates basin, the 2007–10 drought was followed by the outbreak of the Syrian civil war and the consequent spill-over into Iraq, exhibiting a potentially causal (yet complex) relationship between these events. Contrary, no major conflict erupted in the more water stressed lower Jordan River basin, despite the tensions between the riparian parties.

What happened in the Euphrates River basin?

The Euphrates River basin extends from Turkey in the north, through Syria, to Iraq in the south.

In Syria, water policy focus has been on food self-sufficiency since the 1980s, and hence on the advancement of water-intensive agriculture, particularly in the Euphrates basin. Between 1985 and 2005, irrigated land has more than doubled. The expansion of irrigation, coupled with mismanagement and corruption in the water sector, led to the over-exploitation of water resources. As a result, and due to dams built by Turkey, water supply to farmers downstream dwindled and poverty increased. Conditions got even worse by the overgrazing and desertification of eastern Syria, stemming from the nationalization of the steppe in 1958 and the breakdown of the traditional tribal grazing practices. The cancelation of food and fuel subsidies in 2005 sharply raised unemployment, increased the cost of agricultural inputs and exacerbated food insecurity. By the mid-2000s the northeast’s agricultural system was already highly strained, and there were no water reserves from which to draw. This situation reflects the Syrian government’s failures and mismanagement of the Euphrates basin, driven by its political goals. Thus, a crisis was already brewing before the drought began.

The most pronounced effect of the worsened conditions in Syria was a massive out-migration of roughly 1.5 million people from the northeast to the outskirts of the towns and cities to the west. Together with the 1.2-1.5 million Iraqi refugees that arrived mostly at the onset of the drought, they increased the number of the urban population from 8.9 million in 2002 to 13.8 million in 2010. Many of the migrants settled in illegal tent camps with limited access to infrastructure. Facing high rates of unemployment and receiving little or no aid from the Syrian Government, these cities and towns became the centre of the developing unrest and the seedbeds of the Syrian civil war.

Also in Iraq the socio-economic environment was already in crisis due to inadequate water management policies and the geopolitical upheavals Iraq went through since the first Gulf war. Iraq is less vulnerable to droughts than Syria as most of its irrigated land is in the Tigris Basin, and the Tigris’s flows are less variable than those of the Euphrates. Still, crop yields strongly declined, food prices and food insecurity increased, and the country was forced to significantly increase food imports. Up to 100,000 farmers abandoned their fields and migrated to urban centres already struggling to provide basic services and economic opportunities. As a result, social tensions increased and in 2014 the large-scale conflict in Syria spilled over to northwest Iraq.

In comparison to Syria and Iraq, southeastern Turkey experienced only limited impacts. Crop yields also dropped but, contrary to the other riparian states, the Turkish government responded by compensating farmers whose yields declined by more than 30% and postponed the payment of agricultural loans.

What happened along the lower Jordan River?

Israel, Jordan and the West-Bank Palestinians share the lower Jordan River. Per capita water resources in these countries are some of the lowest in the world. Especially in Jordan water is scarce. The country’s economy is not that vulnerable to its water resources, however. In 2007, agriculture accounted for only 3% of total employment and 2.8% of GDP. Various measures have been taken to reduce water consumption by agriculture, including a shift to increased reliance on treated wastewater.

In Israel, Jordan River water is combined with aquifers. The use of potable water in agriculture was reduced by drip irrigation and the introduction of large-scale urban effluent recycling in the 1980s. In 2000 the Israeli Government decided to advance desalination. As a result more water can be retained in the Jordan River basin.

The Palestinians depend on agriculture more than Jordan and Israel. The vulnerability of the Palestinians is also intimately linked with actions taken by Israel, including control on much of the water supply to the West Bank.

In recent years, Israel’s growing desalination capacity has significantly increased the flexibility of water supply in the country. Due to this increased flexibility, and Israel’s interest in reducing tensions with the Palestinians and in Jordanian stability, Israel increased the quantities conveyed to the West-Bank Palestinians and to Jordan. Desalination also reduces the vulnerability of Israel to climate change.

In comparison to the Euphrates basin, societies along the lower Jordan River suffered only limited impacts during the 2007–10 drought. Despite the drought, no significant migration occurred and conflicts did not erupt between or within the riparian states. Rather, the semi-formal cooperation in the basin continued through technical cooperation and water conveyance.

The Jordan and Euphrates basins compared

Of the two basins, the Jordan River is seemingly more stressed, but no water-related conflicts erupted when the 2007–10 drought occurred. The absence of an overt conflict in the Jordan River basin stands in stark contrast to the events in the Euphrates basin, where water availability is considerably higher. Thus, when comparing the societal responses to the drought between the basins, climatic factors have only limited explanatory power. This stresses the necessity to view such responses within the geopolitical and internal settings in which they occurred.

On the geopolitical level, the differences between the basins stem largely from the different responses taken by the upper riparian countries Israel and Turkey. Israel made more adjustments than Turkey. This is partly due to Israel’s ability to reduce its vulnerability through adaptive technology and thus assist in addressing the more critical water shortages of its neighbours. This technology includes wastewater recycling, desalination, and intra-basin water transfers. The additional water released by Turkey after the onset of the drought was limited, and Syria was not in a position to significantly augment the flow downstream to Iraq. Conflictive settings in the Euphrates basin worsened after the Syrian civil war broke out and relations between the Assad regime and Turkey deteriorated.

On the level of internal settings the vulnerability of Syria and, to a lesser extent, Iraq has increased and their adaptive capacity eroded due to a high economic dependence on agriculture leading to the over-exploitation of groundwater resources. In Israel and Jordan the drought interacted with significantly less vulnerable economies, being less dependent on agriculture. Internal power shifts in Israel have also advanced desalination, decoupling the country’s water supply from climate and reducing its vulnerability to droughts even further.

Large-scale emigration may increase pressures in the destination areas and lead to conflict. Whether this happens depends on the economic and social structures of these destination areas, as well as the prior relations between the immigrants (as a group) and the host population.

As the events in both basins show, migration may constitute the most critical societal response to climatic perturbations. The massive out-migration from Syria’s northeast and the Assad regime’s inability to provide the basic needs of these migrants contributed to the outbreak of the civil war. Subsequent large-scale refugee waves to Syria’s neighbours did not lead to similar breakdowns, illustrating the higher adaptive capacity of these destination areas to absorb the immigrants.