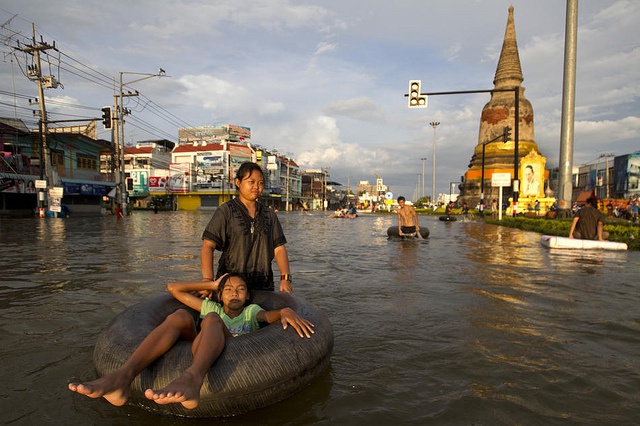 The flooding in Thailand in 2011 hit suppliers of the electronics and automotive industries, and thus car manufacturers in Europe and the US (photo: dany13, www.flickr.com).

In our globalized world an extreme event in one part of the world can have a major impact on business continuity on the other side of the planet. This happened in 2011 when a flooding in Thailand hit suppliers of the electronics and automotive industries, and thus car manufacturers in Europe and the US.

The Thailand event illustrates the importance of supply chain networks being sufficiently robust with respect to climate change risks. Large-scale impacts of climate change on industrial supply chain networks have been assessed for manufacturing industries in Austria, in the alpine state of Tyrol. A survey on climate change risk perceptions and a number of interviews was carried out among 102 manufacturing firms. This was done for the sectors metal and engineering, timber products, and construction. Remarkably, the response rate to the questionnaire was extremely low: only 102 out of 1871 firms replied. Apparently, many firms considered the topic as strategically irrelevant or found it difficult to conceive of climate change impacts as a relevant business factor.

A literature study was part of the Austrian research. This study shows that supply chain networks are vulnerable with respect to climate change in a number of ways.

Raw material supply may be disrupted. Price fluctuations or a long-term increase in prices for timber may result from more insect outbreaks and fires in forests, for instance. The production of mineral raw materials may be hindered by flooding of mines, by gravel roads or railroads being damaged due to heavy precipitation or forest fires, and by water needed for mining operations becoming increasingly scarce. Deliveries from suppliers may be interrupted due to extreme weather events in locations of supplying companies, like the Thailand event in 2011. Roads and railroads may be closed due to inundations or storms, and operations of seaports and inland shipping may be disrupted.

Electricity supply may fail when there is not enough cooling water for thermal power plants during heat waves, or water for hydropower during droughts. In addition, inundations and storms may damage power lines or transformer stations, and blackouts may result from increased energy demand for cooling systems and air conditioning during heat waves. Water supply infrastructure may fail during heavy precipitation and floods, and less precipitation may increase risks of water conflicts between water intensive industrial processes and other forms of water demand.

More intense heat waves can pose health risks particularly for manual labourers due to potential loss of concentration at machines or even heat stroke. Besides, labour productivity may decline. IT networks may fail, when server rooms get flooded or when cables underground or aboveground get damaged during floods or storms. Extreme events like inundations or storms can lead to physical damages at plants as well as at office and storage buildings.

Disruption of delivery to consumers

The climate change discussion may increase environmental consciousness of citizens and thus change customer preferences. Extreme weather events can lead to a decline in sales due to decreasing purchasing power of consumers. Moreover, product delivery to customers may be affected by disruption of infrastructure.

Climate change may motivate changes in regulations, incentives and reporting requirements which affect manufacturing firms, including for example changes in product policy, rising environmental taxation, or increasing reporting requirements from capital market institutions. Furthermore, access to finance may become a risk if banks start to refuse credits to companies that are not managing climate risks properly.