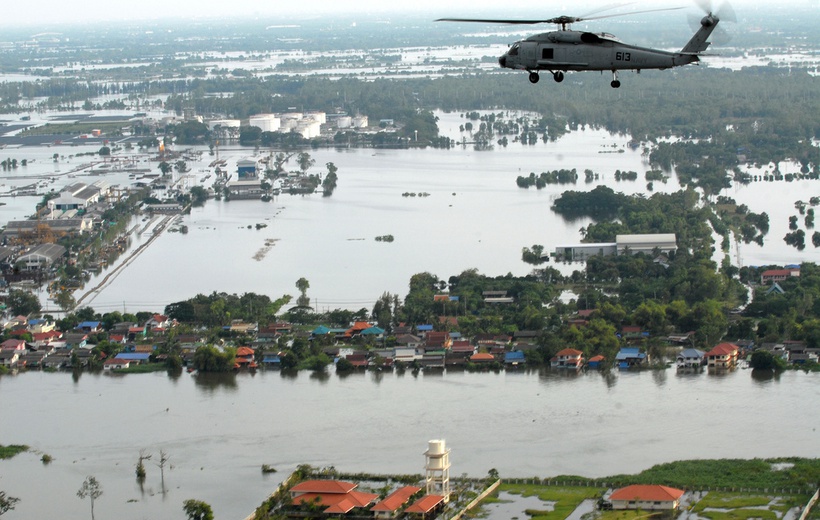 Even under the most optimistic scenario of ‘only’ 1.5°C global warming, a more than doubling of global river flood risk was estimated compared to 1976-2005 in a recent study. This implies that effective adaptation plans must be implemented timely to control river flood risk.

Globally, almost 1 billion people live in floodplains. Global warming will intensify the hydrological cycle of the planet, leading to more extreme rainfall accumulation and a widespread increase in river flood risk in all continents. Under a high-end scenario of climate change, global river flood impacts are projected to rise at an average rate of 2.4 million people and 3 billion EUR per year, exceeding a fourfold increase in flood risk by the end of the century due to climate change only.

This is one of the findings of a study on flood risk in large river basins across the world for three specific warming levels: 1.5°C, 2°C, and 4°C compared to preindustrial levels. The two lower levels refer to the Paris Agreement where it was agreed to join efforts in keeping the increase in global average temperature to well below 2°C above preindustrial levels and to pursue efforts to limit the temperature increase to 1.5°C. In this study projections from seven climate models were used to estimate changes in the expected damage and population affected by river floods under these three warming levels. The study focused on climate change effects only: effects of socioeconomic changes (population, GDP, land use) were not included.

The study takes the impact over the baseline period 1976-2005 as a reference. Central estimates of global flood risk in this baseline period total 54 million people affected and 58 billion EUR (75 billion USD) of damage per year. The findings of this study indicate that, compared with 1976-2005, the expected damage and population affected by river floods increase by 120% and 100% in the study area, respectively, when global warming rises by 1.5°C compared to preindustrial levels. For 2°C global warming expected damage and population affected by river floods are estimated to increase by 170%, and for 4°C global warming by about 500%.

Largest increase in flood risk was found for the U.S., Asia, and Europe. Largest absolute impacts were found in China, where current estimates of 9 million people affected and 25 billion EUR damage per year are projected to rise with global warming, reaching 40 million and 110 billion EUR per year at 4°C warming. A strong (more than 20-fold) increase in flood risk was also found for India and Bangladesh at 4°C warming, which puts them in the top of countries with most people affected. Remarkably, projected increase in flood risk is relatively high for the European Union as a whole as well, in spite of the relatively high standards of flood protection in the EU countries.

According to the authors these results imply that effective adaptation plans must be implemented timely to complement mitigation efforts in order to control flood risk. In fact, socioeconomic drivers are likely to make impacts even higher in developing countries and in regions with significant population growth. The increase in flood risk, the authors conclude, may become unsustainable in regions where the combination of socioeconomic and climatic drivers is particularly adverse, potentially triggering large-scale climatic crises involving conflicts and mass migration.