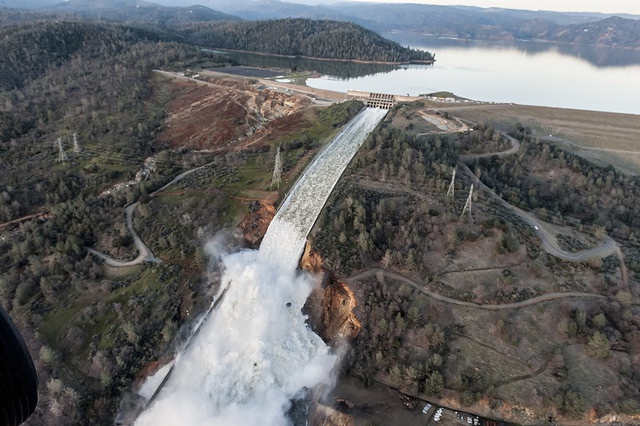 A conference on the impact of extreme weather on critical infrastructure was organized at Deltares (the Netherlands) on March 23 2017. Final results were presented of the European INTACT project, a collaboration of 12 research partners in eight European countries. Over the last three years knowledge and tools have been developed to support operators and policy makers to protect critical infrastructure against extreme weather events under climate change. These results are available on www.intact-wiki.eu.

At the conference, three distinguished speakers presented their views on critical infrastructure vulnerability and adaptation to climate change.

A different approach to water

Henk Ovink, the Netherlands’ Special Envoy for International Water Affairs, stressed the importance for the world to become more water resilient. ‘We need a different approach to water’, he stated: ‘90% of all disasters are water-related; 50% of the world’s aquifers are past their tipping point. Water is scarce but we don’t treat it as a scarce good.’ Asia will be hit hardest and first, according to Ovink. On the one hand the World Meteorological Organization stresses we are in unchartered territory, on the other hand the G20 countries dropped any mention of climate change in their joint statement. ‘You can ignore the facts, but you can’t deny them’, Ovink replied.

The solutions of today will not fit the challenges of tomorrow. According to Ovink the first five years are critical to reach the goal of the Paris Agreement to keep global warming below 2 degrees Celcius. But how do we deal with it? Ovink: ‘We have to transform this challenge into a positive thing. Turn the long-term goal into short-term profitable actions. Five years is a good time step for business cases that can be fit into a long-term perspective.’ Connecting the short and long term is crucial, according to Ovink. And science, because ‘if you don’t invest the millions (science) you will never get the billions (adaptation) right!’

As the Netherlands’ Special Envoy on water he wants to bring across the globe that living with water is a cultural thing, and that the Netherlands is a clear example of this. It is not about engineering, it is about collaboration. In the Netherlands collaboration on water issues is organized in regional water authorities. The first one was founded in the year 1122. Solutions are not found by the government, they are found in close collaboration with stakeholders. These solutions must not just focus on safety; they must focus on safety and quality. According to Ovink ‘that’s how you add value to your country’. Several recent projects in the Netherlands illustrate this: the Room for the River programme, a Sand Engine in front of the Dutch coast, a parking garage inside the dunes. The Dutch live with water, and this never stops. After all, we can’t fix climate change. We have to be flexible and adapt to future developments.

No excuse for inaction

John Sweeney, climate scientist at Maynooth University in Ireland, talked about anticipating and coping with the coming extremes. ‘We live in exceptional times, the pace of climate change is speeding up’, he told the audience. Relative small changes in average climate conditions can have far-reaching consequences. A conservative change in the mean of, for instance, global temperature leads to a disproportional change in extremes. Ireland has had its share of extremes over the last years: in 2015 the most extreme rainfall event of the last 300 years, in 2013/2014 the stormiest winter of the last 143 years, storm Darwin in 2014 that pushed waves up to 25 metres high.

The uncertainty of these projected changes increases substantially over time. How do we convey this to decision makers? ‘Uncertainty is no excuse for inaction’, Sweeney stated, and he stressed three principles to make his point: the precautionary principle, intergenerational equity, and the polluter pays principle. ‘The window for solutions is closing’, he added.

According to Sweeney a major problem is the fact that science has failed to get the message through to the wider audience. ‘We need a new approach to get our message across in a more convincing way. We need pressure bottom-up and top-down: from voters to convince our politicians to act, and supranational pressures as well.’ Science should inform policy but it doesn’t always work like that. ‘Politics doesn’t always take science on board. Leadership is coming from business, communities, NGO’s, not necessarily politics.’

Resilience of critical infrastructure is a team sport

Peter Williams of IBM shared his insights on the resilience of critical infrastructure and how this infrastructure can be affected by extreme weather and hazards. He introduced the term ‘chronic stress’ and how this can lead to disaster by taking the situation of the Californian Oroville Dam as an example. Last winter in California was extremely wet. At the Oroville Dam the regular spillway could no longer be used to discharge water because the concrete broke off. The emergency spillways, not used in the last 50 years, had to be used and a lot of people had to be evacuated. Two chronic stresses, extremely high rainfall and a lack of investment in the infrastructure, nearly caused a disaster.

According to Williams you never know what infrastructure assets are critical or non-critical under chronic stress. A non-critical asset may become critical when the situation changes, and all assets interact. Failure chains from one asset to another may be hidden under normal circumstances. Once a falling tree cut a power line that, through cascading effects, led to a power outage in the northeast of the US for 4 days, affecting 60 million people. ‘Probably the most expensive tree ever’, Williams added. ‘The resilience of critical infrastructure is a team sport’, he stated. ‘Failure chains can make non-critical infrastructure suddenly highly ‘critical’. You can never say a certain asset is non-critical.’