How to protect office-workers from future heat stress? 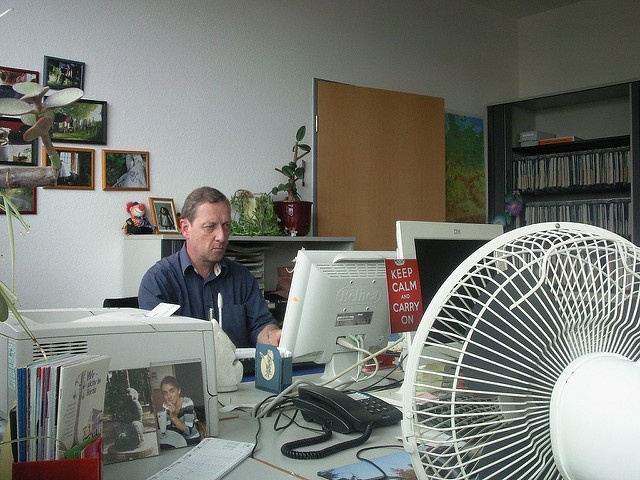 A hot day at the office (photo: Erich Ferdinand, www.flickr.com)

In office buildings without active cooling equipment, unfavorable conditions due to overheating have an important influence on the wellbeing and the productivity of the office workers. If these adverse conditions become too severe, precautions are demanded according to international standards and national legislations. ISO standards require additional work breaks if (workplace) climatic conditions deteriorate. This causes lost working hours and economic losses.

In a building without active cooling, the number of lost working hours may quadruple between now and the end of this century under a high-end scenario of climate change. This was shown for a typical Western-European, recently built five-story office building in the Belgian city of Antwerp.

Solar blinds and increased (active) ventilation are effective adaptation measures that reduce the amount of lost working hours for this far future period by approximately 60 and 90%, respectively. Moreover, moving employees within the office building has a significant positive effect, reducing the number of lost working hours by 75% in the case of the model set up. Adapted working hours are also effective.

Installing an active cooling system with a fixed threshold temperature nullifies the overheating risk. However, operational costs of such a device will drastically increase over the course of the twenty-first century. For the studied prototype building, cooling demand increases with 25% by 2100. Cooling costs may be reduced significantly, however, by adaptation measures such as external shading or changes in the building ventilation scheme. Adding external solar blinds, for instance, reduces the cooling costs by approximately 30%, according to this study.