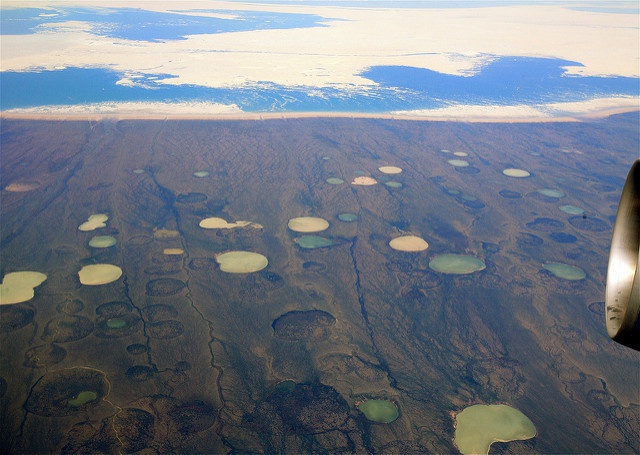 Global warming of 2°C above preindustrial levels has been considered to be the threshold that should not be exceeded to avoid dangerous interference with the climate system. What will a 2°C rise of global mean temperature lead to with respect to the degradation of permafrost, covering 1/4 of the Northern Hemisphere? This was studied by estimating permafrost soil temperature increase under 2°C global warming with ten climate models, and quantifying the resulting thaw and settlement of the soil.

The consequences of melting permafrost

Permafrost is defined as the ground where soil temperature remains at or below 0°C for at least two consecutive years. Approximately 1/4 of the Northern Hemisphere land area is permafrost. Melting of permafrost under global warming will affect hydrology and water resources, because of the water that flows out of the melting soil. It will affect ecosystems, because the heating of the soil and its changing hydrology changes the biogeochemical cycles in the soil. It will affect human infrastructures, because the soil gets less stable and buildings, roads, oil and gas pipelines, etc., settle differently from one point to another. In fact, melting permafrost affects climate change itself, because of the release of carbon from the degrading soil.

The impact of the Paris Agreement: 2°C global warming

According to these climate models, global warming of 2°C above preindustrial levels will be reached in the first half of the 22nd century under a moderate scenario of climate change. Warming at northern latitudes will exceed the global mean. When the global mean temperature rise reaches 2°C, air temperature in the permafrost region increases by at least 2.9-4.4°C.  As a result, the Northern Hemisphere’s permafrost soil temperature will increase by 2.34-2.67°C at 6 m depth relative to the period 1990-2000.

Under 2°C global warming the permafrost extent will obviously retreat north and decrease by about 25%. The thickness of the so-called active soil layer, the layer that thaws and freezes in turn, will increase by 0.42-0.45 m on average. Locally the increase may be much higher though, up to 5 metres. Ground settlement owing to permafrost thaw is estimated at 3.8-15 cm on average for the Northern Hemisphere permafrost land area, but may reach several metres locally.