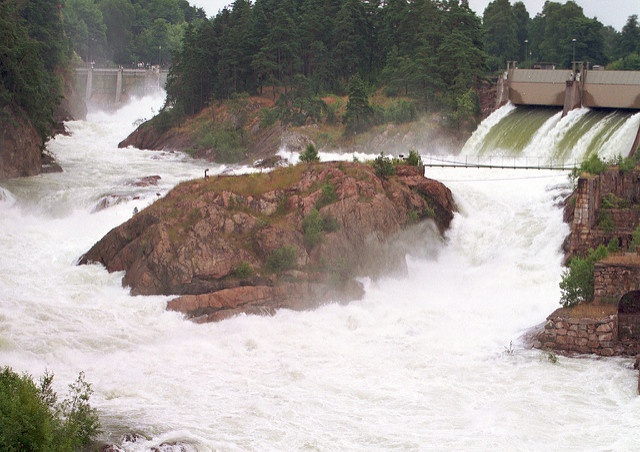 More rainfall throughout the year may proof beneficial for the hydropower industry, but it also raises questions regarding the safety of the infrastructure, i.e. large dams, under future climate conditions. Climate change projections must be included in the design of dams. In Sweden, guidelines for dams now include anticipating climate change. What upper limits of climate change did they include?

In 1985 a dam at a hydropower reservoir failed in central Sweden during a major storm. Luckily, the downstream residents had been warned and there were no fatalities. This failure was the trigger to speed up the work on new guidelines for the design of dams. The latest edition of the guidelines includes regulations on how to anticipate the consequences of climate change. In brief, with respect to climate change dam design must be based on a combination of 3 boundary conditions. First, the reservoir’s capacity must be large enough to safely store or discharge the snowmelt inflow as a result of a snow pack that accumulates on average once every 30 years. In addition, the capacity must be large enough for a period of 14 days of intensive rainfall. Third, dam safety must be safeguarded when this combination of snowmelt and rainfall occurs when the subsoil is already saturated.

These 3 conditions must be quantified for 2100, based on a set of scenarios of climate change run by a large number of models. This way an upper limit of extreme conditions is defined to guarantee dam safety for the long run. In practice, the Swedish Meteorological and Hydrological Institute SMHI makes these calculations and delivers the output, in terms of variables like water inflow, reservoir water level and water volume, to the hydropower industry.

Gunn Persson, hydrologist at SMHI, stresses the importance of using several climate scenarios to substantiate the upper limit in design guidelines. ‘Investments are made for the long run. This means that decisions have to be made under uncertainty’, she clarifies. She also realizes that it’s not just uncertainty of climate change the industry has to deal with. ‘Society changes faster than climate, and this affects energy demand’, she adds.

What is the best way to deal with uncertainty when making decisions for the long run? Make the investments that cannot be avoided at the beginning, but postpone investments that can be made later. This flexibility allows for waiting how climate change develops. The outlet of Lake Mälaren near Stockholm, for instance, needs to be reconstructed. This reservoir is the fresh water supply for 2 million people and a higher discharge capacity is needed in present conditions. But the design should be robust enough for climate change and changes in demand for the rest of this century. This is especially important for the outlet capacity, while the regulation strategies will need to be adjusted during the life-span of the construction to meet future changes in climate and inflow patterns. According to Gunn Persson it is more complicated to make a ‘climate proof’ design for this lake than for most reservoirs in Sweden. Gunn: ‘For this lake, we not only have to deal with the inflow but also with sea level rise that hinders the outflow. This sea level rise in turn has to be considered in combination with land uplift, since Sweden is still rising in response to the last ice age’. The latter is a benefit in this case. Gunn: ‘Because of land uplift sea level rise will not be much of a problem in the first 50 years’, she concludes.